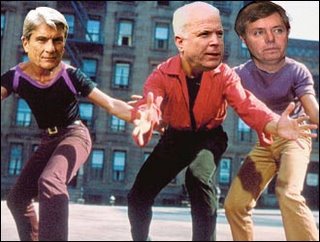 Four GOP Senators, McCain, Warner, Graham and Susan Collins are putting up roadblocks to the President's plan on dealing with terrorist detainees.

"In the committee vote, Warner was supported by GOP Sens. McCain of Arizona, Lindsey Graham of South Carolina and Susan Collins of Maine. Warner, McCain and Graham had been the most active senators opposing Bush's plan"

"John McCain, the Republican frontrunner for the 2008 presidential election, has dramatically raised the stakes in a fight with the White House over interrogation techniques permitted for use at secret Central Intelligence Agency prisons by saying he is unwilling to back down on the issue even if it ruins his chance of becoming president."

McCain don't flatter yourself. You did not have a snowball's chance in Hell of being the nominee BEFORE this latest grandstand.

Of course McCain is worried about how our soldiers will be treated if we don't coddle the terrorist detainees.

“His decision to take a stand on this issue is not based on a political calculation,” said Eileen McMenamin, his spokeswoman. “He believes this is the right thing to do to protect American servicemen and women, and our values.”

Can someone please explain to me how McCain's plan will protect our soldiers when they are captured? Will the terrorist sharpen their knives before they behead them? PUH-LEAZE - the Islamofascists could care less what WE do to prisoners - that does not factor in their own torture plans. This politically correct war plan is hindering our ability to fight the war on terror. Give 'em a taste of their own medicine. No mercy. According to the Left, the world already hates us.

Now that Colin Powell, aka Plamegate enabler, is backing McCain's plan we have even more reason to fight against the terrorist bed & breakfast plan.

Of course the "experts" in the media believe Susan Collins' support of the McCain travesty reflects on the entire GOP contingent in the Senate.

"The vote by the moderate Collins underscored that there might be broad enough GOP support to successfully take on Bush on the floor of the Republican-run Senate."

Not if the GOP wants to keep control over the Senate. The GOP voters will not stand for this opposition to a vital tool in the war on terror.
Posted by Robin at 10:54 PM