Time to Whip Out the Logan Act 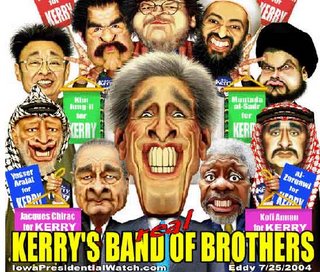 First Senator Bill Nelson, now John Kerry - Jihadists must be ecstatic to see US Senators backstabbing the USA for some face time. Kerry now says that he would have popped in for tea with Allmyjihad but the timing wasn't right but...

Asked if he planned to make a trip later, he said: "At the appropriate time, at some point."

Hey bolt-neck - there is no "right time" to cozy up with Iran. But you do have to love the audacity of the presidential wannabe (thank God he lost). Here's what he wants to discuss with Syria...

Kerry said the purpose of the mission to Damascus would be to listen to the Syrians and find out more about the Syrian government's positions on Lebanon, the Lebanese Shi'ite party Hezbollah and the violence in Iraq.

"I'm going to push them (the Syrians) on a number of different issues. I'm curious about what they might or might not be willing to do as we go forward here," he said.

"Do they have any suggestions how the various equations in the region might be changed?" he added.

You don't need to go to Syria to get the answers to those questions Gomer. Just look at history. I imagine Syria's suggestion about the region would include "Israel gone", "USA beaten", "Islam Rules".

While Kerry is thinking "deep thoughts", maybe he should think about the dusty old Logan Act.

This section shall not abridge the right of a citizen to apply, himself or his agent, to any foreign government or the agents thereof for redress of any injury which he may have sustained from such government or any of its agents or subjects.

Knock - Knock - Atty General Gonzalez - anybody home? We've got three Senators lined up for admission to the Logan Act pokey...
Posted by Robin at 11:28 AM