DC Suffers Through Another Moonbat Tsunami

The five year anniversary of the start of the war in Iraq sent the moonbats into a complete and total frenzy of protest activity. According to people on the ground in DC, the city was awash in the unwashed and covered in pepto bismal pink.

Jonn over at This Ain't Hell was all over the place. He went from protest site to protest site and recorded the events for posterity. He's got lots of pics and videos posted. But this scene makes me scratch my head... 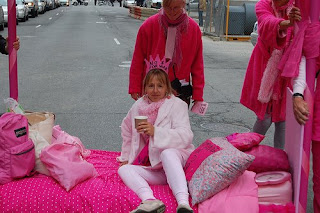 What exactly does Medea flashing her goodies in a bed on the streets of DC mean? Is she protesting Eliot Spitzer? Or maybe she's looking for some hot hippie action. Weird - just freakin' weird.

Of course IVAW was out in force despite the lackluster WSII performances. King Kokesh led the pack. He certainly has a way with street theater. Too bad he's not a mime... 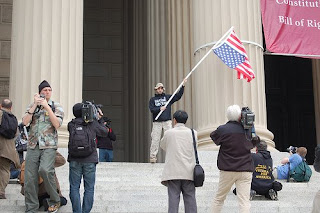 Every time I see the American Flag flying upside down, it makes me want to vomit. Yes - I know it symbolizes a country in distress but damn it sends such a negative image around the world. Oh wait - that's the point.

TSO over at The Sniper got in on some of the protest action. He's got several posts up about today's events but my favorite is his deconstruction of the anarchists and his lunch with Suzie Rottencrotch.

After suffering through WSII and now this, I hereby award Jonn and TSO the Blogger Courage Award. Sorry - not a money award but lots of hugs and my deepest respect for you two guys!
Posted by Robin at 6:52 PM