Mel Gibson Reveals His Anti-Bush Side 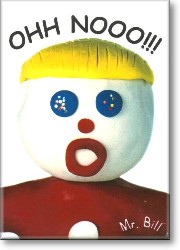 I am sad to report another terrible case of BDS (Bush Derangement Syndrome). The cult of madness, also known as Hollywood, has a new member - Mel Gibson. Yes, Mad Max has truly gone mad..

"Film star and director Mel Gibson has launched a scathing attack on US President George W. Bush, comparing his leadership to the barbaric rulers of the Mayan civilisation in his new film Apocalypto. .."

"Gibson reveals he used present day American politics as an inspiration, claiming the government callously plays on the nation's insecurities to maintain power. "

"He tells British film magazine Hotdog, "The fear-mongering we depict in the film reminds me of President Bush and his guys."

Why do celebrities and politicians leave the soil of the USA and start bad mouthing the President? Could it be that the Master Manipulator, Karl Rove, has some kind of mind control that only works while you are in the United States?

Mel made bunches of money off The Passion, which was certainly not from Liberals' wallets. We fought against the Left who rallied against Gibson and his movie. We were amazed at how he stood up against the Left to make The Passion. Now this... What a shame. Add another Hollyweird celebrity who'll not get any $$ from me.
Posted by Robin at 9:27 AM