Honoring Deserters While Trashing the Heroes 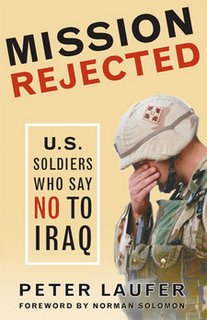 Another "I hate Bush and the US Military" book has hit bookstores. This one is called "Mission Rejected: US Soldiers Who Say NO to Iraq" by Peter Laufer.

Here's how the publisher describes the book on its website:
"Disillusioned, outraged, and betrayed, American soldiers are taking a stand against the war in Iraq.
A shattering journey of revelation, pain, and betrayal, Mission Rejected takes the reader deep into the turmoil of U.S. troops confronting the Iraq War. Some of these soldiers have decided not to fight in Iraq. Others, who have served in the “Sand Box” only to return so appalled by their experience and by what that experience has done to them, choose to declare, in the words of the old Phil Ochs song, “I’m not marchin’ anymore!”

In a nutshell (and 'nut' is appropo for this discussion), this is a book about those "brave" young Americans that deserted the military or claimed "conscientious objector" status to avoid their duties in Iraq.

Some of the names are familiar to those of us fighting against the continuous drumbeat of military and soldier bashing - Jeremy Hinzman, Aidan Delgado, etc. But one deserter caught my attention because of the even more outrageous claims he has made against our heroes. You've probably heard of him - Joshua Key.

First a little background on Joshua Key... He signed up for the Army in Feb. 2002. The recruiters "promised him that he would be assigned as a bridge builder in a non-deployable unit and assured him that he would never see combat." [we are supposed to believe that after Sept 11, 2001 a military recruit is promised that he would never be deployed or see combat? What the hell did he think he was signing up for - Day Care?] Key was stationed at Fort Carson Colorad with the 43rd Company of Combat Engineers. He stated that he ended up in Iraq one month after the invasion of April 2003 with the 43rd Combat Engineer Company 2/3 Armed Cavalry Regiment.

Some of his complaints?
"I got to call my wife once every month, maybe once every two weeks if I was lucky. Mail, shitty, if it even came." [WHAT? There were no payphones set up for your use? You were not issued a satellite phone for personal phone calls? Your mail was delayed? OH my heart is bleeding]

"...he was frustrated by the military regulations that forbade his accepting dinner invitations to join Iraqis for social evenings in their homes." [Damn - he packed his tux for no reason]

"We were told to steal water from other troops before we left on a mission so we'd have enough." [WTF?]

"We were never trained in how to raid houses and do traffic control points or how to institute curfews throughout cities and make it work, but that's what we were doing." [I guess they just dropped you off and said 'figure it out', huh]

"We were told that if you feel threatened, you shoot." [And that is a problem because....?]

Of course no deserter's repertoire of hysteria would go without claims of murder and mayhem visited upon this restive country by our soldiers....

"We impose killing. We detain them, we torture them - we're the ones that caused it all." [he must have gone to the Ted Kennedy school of anti-war propaganda]

"You can take human lives at a fast rate and all you have to say is, "Oh I thought they threw a grenade." [a claim that could easily be disproved when you walked away with your limbs intact]

"He recalled participating in almost nightly raids on homes of suspected insurgents in Ramadi and Fallujah as a member of the 43rd Combat Engineer Company."

"He saw soldiers ransack the homes and steal jewelry or money while superior officiers looked the other way."

"We'd use explosives to blow up the front door, then six of us would run in, grab the males and send them off for interrogation and hold the women and children at gunpoint while we completely destroyed their home." [Was that after you pulled up to the home in a 'civilian vehicle' as you claimed in previous articles?]

"...witnessed one of his 'trigger happy' platoon's squad sergeants shoot part of an unarmed Iraqi man's foot off in Khaldia." [Did you bother to report this to any of the commanders or did you want until you deserted to have this flashback?]

Worst of all is this claim - "He saw the beheaded bodies of four Iraqis beside a shot-up truck and witnessed several members of the Florida National Guard kick a severed head 'like a soccer ball." [This supposedly happened soon after he arrived in Iraq. That was when the country and the US military was crammed full of imbedded reporters. How many reporters do you know would let something like this go without a report?]

So now Joshua Key is living in Canada, waiting on the ruling on his dissident status. Meanwhile he tours cross country spewing his anti-military, anti-American crap to anyone that will listen. He even speaks at mosques where he "offers apologies and seeks forgiveness". Key uses the same tired old talking points that every other military hating "activist" has used - the oil, Bush lied, no WMD, blah blah blah, yadda yadda yadda. He has added a few original America bashing talking points to the mix...

"Saddam Hussein didn't like terrorists. I mean, he was not a good man himself, but he didn't allow terrorists into his country."

"I was made to be an American terrorist."

(Note to the anti-American crowd - at least get someone that makes a modicum of sense in their rantings. I mean, Saddam Hussein didn't like terrorists? Get him hooked up with Fenton Communications STAT.)

At this point, I hope that Canada keeps this guy (and his wife and 4 kids). We've got enough mindless Sheehanites here now. He has given up any right to have a grain of American soil touch his pinky finger ever again.

References for this post:
Book: Mission Rejected. When AWOL is the Only Way Out.
Fugitive GI Speaks to WSWS (World Socialist WebSite) on Iraq War
US Deserter Tells of Atrocities
US Army Deserter Fled Iraq for New Life in Canada
Posted by Robin at 6:49 PM