OOPS THEY DID IT AGAIN - DAMN THE NYT! 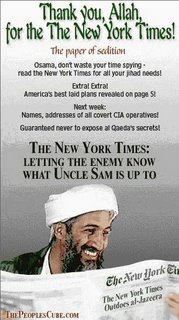 DAMN! How much more classified national security information does the NY Times have to print before we can hang them from the highest tree? Fresh on the heels of the latest Risen-Lichtblau terrorist assistance, the Times publishes info about a classified briefing from Gen. Casey about troop withdrawal!

"According to a classified briefing at the Pentagon this week by the commander, Gen. George W. Casey Jr., the number of American combat brigades in Iraq is projected to decrease to 5 or 6 from the current level of 14 by December 2007."

"General Casey's briefing has remained a closely held secret, and it was described by American officials who agreed to discuss the details only on condition of anonymity. Word of the briefing comes after a week in which the American troop presence in Iraq was stridently debated in Congress, with Democratic initiatives to force troop withdrawals defeated in the Senate."

The writer, Michael R. Gordon, then goes into great detail about timelines, troop numbers and many other specifics that the terrorists will be able to use to plan their attacks against our soldiers.

This information was published for no other reason than payback for the defeat of Kerry's "cut and run" proposal and Harry's "cut and run slower" plan. This is playing political payback games with the lives of our soldiers and our national security.

THERE IS NO EXCUSE FOR THIS TREASON! This is a willful and deliberate leak of potentially harmful information and is obvious fodder for the terrorists. The NYT and the squealing pig leaker have demonstrated once again that the goal is a US defeat in Iraq regardless of the cost. These people are nothing but scum sucking piles of dung that deserve nothing but a boot in the ass and a lifetime in a maximum security prison. They have committed treachery on the level of the terrorists and do not deserve the benefits and privileges of freedom.

I encourage all to write, call or email any advertisers of the NYT and put them on notice as terrorist supporters. I demand that AG Gonzales get off his ass and prosecute these rabid little monkeys ASAP. I have had enough and so has my country. This cannot continue - it puts all of us in danger and weakens our country.

DAMN YOU LEAKERS AND THE ENEMEDIA THAT ENABLES YOU!
DAMN YOU TO HELL!
Poster above courtesy of Michelle Malkin.
Posted by Robin at 7:14 PM