Since no one in the media will show what Haditha is really like, I will do my part to educate the public. I have been searching all over the 'Net for stories and pics about Haditha prior to the sexed-up incident (and I didn't use Google once!) 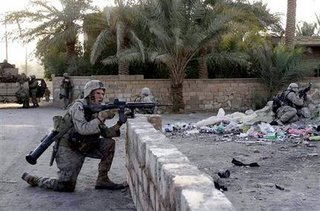 In this picture provided by the U.S. Army, Lance Cpl. Jeffery Wilson from 3rd Platoon, Kilo Company, 3rd Battalion, 1st Marine Regiment, and soldiers of the Iraqi Security Forces take cover on the streets in Haditha, Iraq while in search of insurgents on Tuesday, Oct. 4 2005.


5th CAG cares for Haditha Hospital’s wounds June 05, 2005
"During Operation New Market, which began on the night of May 23, the main objective of the CAG team, led by Maj. Matthew D. Chisholm, Team 4 leader, was to assess recent damages done to Haditha Hospital. The hospital was damaged earlier in the month when insurgents occupied the building. The team also wanted to talk to the staff to see how the hospital was functioning and ask locals their opinions about personal care."

"Damage to the one-story hospital occurred when a vehicle-borne improvised explosive device was driven into an outside wall during a firefight with Marines from 3rd Battalion, 25th Marine Regiment, 2nd Marine Division. Only the service wing, kitchen, laundry, storage room and private patient ward sustained severe fire damage and no civilian casualties occurred. "The insurgents came in and took over [the hospital]," said a doctor working there. "We didn’t want them here but they came anyway." 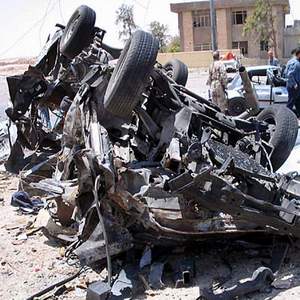 Bomb kills 14 Marines in Iraq August 3, 2005
The U.S. military said that 14 Marines were killed in a roadside bomb attack in north-western Iraq, while an American freelancer reporter was found dead in the southern city of Basra.
The bomb went off near a Marine amphibious assault vehicle as it was traveling south of Haditha, a city on the Euphrates river about 200 km northwest of Baghdad.
A civilian translator was also killed in the blast. One Marine was injured.

On Monday, six Marines were killed in clashes with fighters in Haditha, while a car bomb blast in the nearby town of Hit killed a seventh Marine. 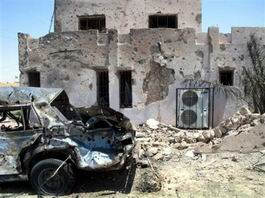 Vehicle upended next to a police station with an explosion in Haditha, July-15, in which killed 10 more as the anti-US crusade swells in Iraq.


This article from CNN is EXTREMELY INTERESTING in several respects.
First it was filed by Arwa Damon - the CNN reporter that defended the Kilo Co. Marines. Second, the article includes a statement by Capt. James Kimber, commander of India Co. This is the Capt that the media has portrayed as part of the "Haditha Massacre". Notice that it plainly states that he was with India Company - the Marines involved in the current investigation were with Kilo Company.
Lastly and more importantly, it is proof of the tactics of the insurgents in Haditha and the civilian complicity with the attacks against the soldiers. PLEASE click the link to read the entire article!!

Marines find insurgency's deadly tools in Haditha - October 7, 2005
"US Marines and members of Iraqi Special Forces on Thursday uncovered a sizable weapons cache hidden in a shrine and yard adjacent to a mosque in east-central Haditha... and continued to uncover deadly buried roadside bombs. The city itself is almost literally an improvised explosive device (IED) field."

"...the route in front of the mosque was being swept for mines when the unit was hit by an IED... Discovered a second IED with a detonation cord leading to the mosque... The unit hit by the IED reported seeing a male fleeing from the scene." (this is a little over a month prior to the incident currently under investigation. Remember the "innocent males" in the taxi who ran from the Kilo Co. soldiers??)

"...From two large blue plastic tubs Marines pulled out explosives including rocket-propelled grenades (RPGs), bomb-making materials and grenades. Hidden underneath the crumbling rubble of the graveyard and the rock filled garden surrounding the shrine, Marines found 16 155mm artillery shells, about half of which were already rigged with detonation cord. Buried in the catacombs of the shrine, they found more RPG rounds, RPGs and AK-47 assault rifles."

"It takes two to three hours to bury one of these IEDs" one Marine said. 'There is no way that they have not seen anything if we found two of these IEDs in front of the mosque and found this weapons cache here."

"...most of the IEDs found in Haditha were buried underneath the pavement. Insurgents have come up with ways to tap into the local power supply to keep the batteries on the detonators charged. Typically, Marines have been finding suspicious wires protruding from the asphalt throught the city. Buried underneath are usually two to four 155mm rounds and sometimes propane tanks." (propane tanks exploded in one of the houses during the Haditha incident - see Time Magazine story in my previous post.) 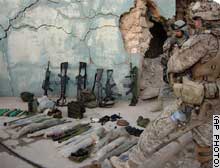 Cache ... US troops found these weapons in a Sunni mosque in Haditha, Iraq, by following trigger wires from a blast site.


Bani Dahir Mosque Weapons Cache Uncovered December 30, 2005
"Yesterday, while conducting clearing operations at Bani Dahir, near Haditha, Iraqi Army soldiers and Marines found a weapons cache in the mosque courtyard. In terms of quantity, compared to other finds, the cache was small."
The article even includes a powerpoint slide show of the weapons uncovered - including explosives in soda cans, cell phone chargers, etc.

Ladies and Gentlemen of the Jury - I rest my case. There is no freaking way that the "civilians" killed were just innocents getting dressed for work and school. If not responsible for detonating the bombs, they HAD to be aware of the presence of the bombs. Remember the 9 year old girl (that wants the Marine executed), reported that "she knew the bomb was going to go off and covered her ears."

Our Marines are being portrayed as murderers while the true murderers and those aiding and abetting them are portrayed as innocent civilians. I call BS on this. Damn you Murtha.