Once again the ACLU is using money from our pockets to defend the absolute lowest of the low. I'm sure everyone knows about Fred Phelps and the members of his fake church who protest at soldiers' funerals with signs like the following... 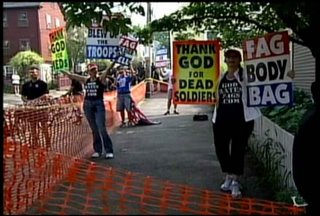 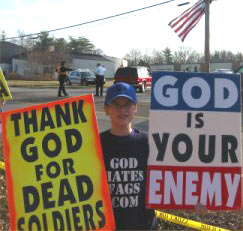 Yes the ACLU is going to bat for this group of lunatics. According to the Washington Post...

A Kansas church group that protests at military funerals nationwide filed suit in federal court, saying a Missouri law banning such picketing infringes on religious freedom and free speech.
The American Civil Liberties Union filed the lawsuit Friday in the U.S. District Court in Jefferson City, Mo., on behalf of the fundamentalist Westboro Baptist Church, which has outraged mourning communities by picketing service members' funerals with signs condemning homosexuality.
The church and the Rev. Fred Phelps say God is allowing troops, coal miners and others to be killed because the United States tolerates gay men and lesbians.

Here's what the ACLU had to say about the suit...

In the lawsuit, the ACLU says the Missouri law tries to limit protesters' free speech based on the content of their message. It is asking the court to declare the ban unconstitutional and to issue an injunction to keep it from being enforced, which would allow the group to resume picketing.

Now keep in mind that these useless pieces of trash are protesting at OUR SOLDIERS' FUNERALS. To think that the soldiers being laid to rest died defending the right of these scum suckers to say what they say. This goes way beyond any claim of "freedom of speech" - this is just lacking simple human decency. What about the right of the family to be able to bury their soldier without being subjected to the crass and evil hatred that issues forth from these fonts of bile?

Just for good measure, here's a few comments that Shirley Phelps- Roper, Fred's daughter and one of the leaders of this group, had to say during an interview on Hannity and Colmes a few months ago...

SHIRLEY PHELPS-ROPER – Because they will not obey. And the Lord your God is punishing this nation and he’s doing it, one of his weapons of choice is sending your children home dead from the battle. So what were there to do is help you connect the dots and what I feel best about is that in spite of the fact that those legislative Taliban in Iowa passed an unconstitutional measure to try to stop us from putting the cup of furry and the wrath of God to your lips and making you drink it…

If ever you needed a reason to support Stop the ACLU then here it is...

Read more at Stop the ACLU - ACLU and Westboro Hate Cult Challenge Missouri Protest Ban
Posted by Robin at 2:55 AM