I have been doing a great deal of research utilizing the AlBasrah.net website - better known as one of the biggest Terrorist Supporting Websites available. If you want to see what the "resistance" in Iraq is up to, Al-Basrah is the place to go.

One of the features of Al-Basrah is the "GI Special". The GI Special is nothing more than propaganda for the anti-military factions to use to demoralize our soldiers and undermine the United States. What makes GI Special even more disgusting is that it is written by an American, Thomas Barton. Barton also runs Traveling Soldier - another anti-military propaganda site. So who is this Thomas Barton and why does he hate our military?

Thomas Barton is listed as a Shop Steward with Local 768 Health Care Workers, AFSCME District Council 37 in NYC. He is also a member of the International Socialist Organization. Barton is a member of New York City Labor Against the War (NYCLAW). He is a former organizer for Vietnam Veterans Against the War. Another scary claim - Barton says he has worked with PTSD survivors for over 30 years, including war veterans at the VA clinic in NYC.

Barton joined in the anti-globalization protests of the International Monetary Fund (IMF) in NYC back in April 2000. In an interview during the April protest, Barton said "It's not the workers who are our enemies - it's the same class of rich people that run both the US and China." He went on to say "The market-economy-Thatcher-Reagan-piss-on-the-poor [attitude] isn't flying anymore."

Since the war in Iraq began, Barton has focused his attention on the US military. The Traveling Soldier newsletter, which lists Barton as a member of the Production Staff, claims that it is all about "telling the truth - about the occupation, the cuts to veterans benefits or the dangers of depleted uranium." Traveling Soldier also reports "on the resistance to those on top - whether it's in the streets of Baghdad, New York, or inside the armed forces." Here's more from the Traveling Soldier "about us" page...

"We proudly take the side of our class - working people and the oppressed the world over - against those who use their wealth and power to make our lives hell... Our goal is for Traveling Soldier to become the thread that ties working-class people inside the armed services together. We want this newsletter to be a weapon to help you organize resistance within the armed forces - and that can't happen without you."

In the latest edition of Traveling Soldier, Barton proudly writes, "If you're looking for people to blame for the endless evil shit that happens in Iraq in this dishonorable Imperial war, blame the politicans that put the troops downrange, in an impossible situation. Everything flows from the act of invasion and conquest ordered up by the greedy Imperial liars and traitors in Washington DC. They are the enemy."

Also included in the lastest edition is a picture of Zarqawi alongside a picture of President Bush with the caption "One terrorist down, one to go."

Barton speaks at anti-war protests with the focus on creating and endorsing a "rebellion in the armed forces of the United States" to "stop the war". He is a regular contributor to Socialist Worker online and works closely with Iraq Veterans Against the War. Before Barton set up his own website, Military Project, the infamous Not In Our Name carried his "GI Special" and hosted its archives.

His other project, GI Special, is a favorite link for the anti-military, anti-war crowd, not to mention the terrorists looking to harm our soldiers and our country. Barton touts the "massive movements against the war [Vietnam] at home and in the armed forces" for stopping the war in Vietnam. His primary goal is to use the same tactics to get our soldiers out of Iraq.

Each issue of GI Special includes at least one article about failures of the military, the Resistance Roundup, articles about soldiers killed in Iraq from their hometown papers and much more. Here's a sample from the latest edition...

Included in each issue is a photo from a funeral of a US soldier with the caption: THIS IS HOW BUSH BRINGS THE TROOPS HOME: BRING THEM ALL HOME NOW, ALIVE

There are the usual anti-war slogans - IF YOU DON’T LIKE THE RESISTANCE, END THE OCCUPATION (this one usually appears right after the Iraqi Resistance Roundup)

And of course, typical of the anti-military zealots, there is at least one anti-Bush photo per issue. Here's the one from the current issue....

Babies Know The Evil One;
SATAN WALKS THE EARTH IN HUMAN FORM 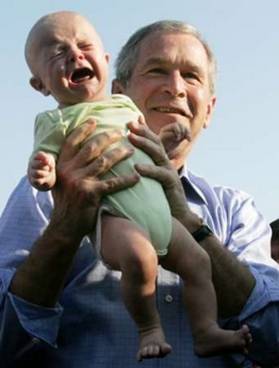 Thomas Barton is the poster boy for the aging anti-Vietnam protestors that cannot move on from their 15 minutes. He spreads his hateful tripe to our soldiers in the name of "Support". He uses the freedoms provided to him by the blood and sweat of the US military to inflame the passions of those who seek to kill them. There is nothing lower than this type of "human being" - except for the people that support him.