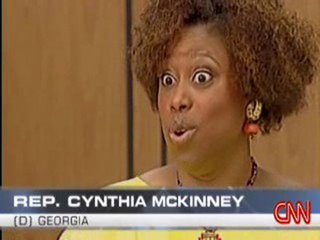 Cynthia McKinney (just typing her name makes the hair on the back of my neck stand up) is now claiming that the Atlanta Journal Constipation -oops I mean, Constitution - libeled her in the op-ed section this past weekend. Wayne Madsen Report has the contents of McKinney's lawyer's letter to the AJC. Mostly just silly little complaints involving how Ms. Tucker portrayed McKinney's little "run-in" with Capital Police.

But how often do you get to see someone claim libel for a report about something they actually said.

Here's what the attorney's letter says:
"Tucker wrote of Congresswoman McKinney: "She suggested that President Bush had known in advance about the Sept. 11 attacks but did nothing to stop them so his friends could profit from the ensuing war." The award winning documentary film “American Blackout” definitively exposed this statement by Tucker as false, as the Congresswoman never made this statement even though Tucker continues to assert that she did."

Hold on there Mr. Lawyer... Maybe you should check out the Internet before you write a complaint based on your client's claims...

"Now is the time for our elected officials to be held accountable. Now is the time for the media to be held accountable. Why aren't the hard questions being asked. We know there were numerous warnings of the events to come on September 11. Vladimir Putin, President of Russia, delivered one such warning. Those engaged in unusual stock trades immediately before September 11 knew enough to make millions of dollars from United and American airlines, certain insurance and brokerage firms' stocks. What did this Administration know, and when did it know it about the events of September 11? Who else knew and why did they not warn the innocent people of New York who were needlessly murdered? "

Then there is this from the Washington Post in April 2002...
"Rep. Cynthia McKinney (D-Ga.) is calling for an investigation into whether President Bush and other government officials had advance notice of terrorist attacks on Sept. 11 but did nothing to prevent them. She added that "persons close to this administration are poised to make huge profits off America's new war."
In a recent interview with a Berkeley, Calif., radio station, McKinney said: "We know there were numerous warnings of the events to come on September 11th. . . . What did this administration know and when did it know it, about the events of September 11th? Who else knew, and why did they not warn the innocent people of New York who were needlessly murdered? . . . What do they have to hide?"

Lastly - what about McKinney's statements the night of the primary just few weeks ago?
"We’ve been in this place before and you know what? It’s impossible to keep a good woman down,” McKinney pronounced. She called herself “the one who stands for truth,” crediting herself with boldness for raising the issue of what Bush knew prior to 9/11."

I guess if you want to get nit-picky you could rightfully claim that McKinney never made that EXACT statement but it was sure damn close to it. Certainly close enough to void any claim of libel, slander or defamation.

Mr Raffauf concluded his letter to the AJC with the following...
"This letter constitutes a demand under OCGA 51-5-11 for immediate retraction in writing these false and libelous statements. In accordance with OCGA 51-5-11(b)(1)(C) Congresswoman McKinney demands that your retraction and correction be accompanied by an editorial in which you specifically repudiate your libelous statements. Tucker and the Atlanta Journal-Constitution have made these statements maliciously and with intent to injure the Congresswoman in her office and profession. Please govern yourself accordingly."

Maybe Mr. Raffauf should be directing that statement to his client and not the AJC...
Posted by Robin at 10:06 PM