Once again I find myself doing the work that the media refuses to do. The alleged rape and murder of the young Iraqi woman and her family is reported as occurring in Mahmoudiyah. Here's how the area has described over the past few years...

"Mahmoudiya is known for its lawlessness and its combination of diverse ethnicities. It lies in an area that has been often referred to as the “Triangle of Death.”
http://www.ict.org.il/spotlight/det.cfm?id=1059

"The area around Mahmoudiya has seen repeated attacks and fighting between armed groups and US troops and is one of the most dangerous places in Iraq." 5/28/04

"Mahmoudiya, along with Iskandariya and Latifiya, is part of an insurgent stronghold region south of Baghdad that has bedeviled US and Iraqi government forces for more than two years despite numerous military offensives.
The stretch along the main highway between Baghdad and Najaf is notorious for guerrilla attacks, kidnappings and robberies, earning it the nickname Road of Death. Mahmoudiya, a mix of Sunni and Shiite Muslims, sits on the tense frontier between the so-called Sunni Triangle and Iraq’s vast southern Shiite heartland." - Common Dreams

Other Notable Events in Mahmoudiyah March 2006... (no mention of the murder of the family or even the death of the family in any search)
3/6/06 – "The correspondent for Mafkarat al-Islam reported eyewitnesses in al-Mahmudiyah as saying that the large-yield bomb destroyed one American tank, killing three US troops and severely wounding two more of them."

Sunday March 12, 2006 – The police mayor of Mahmudiyah, 32km south of Baghdad, is attacked and killed in an ambush.

On 15 March, at least 15 pilgrims were killed and over 50 wounded in Baghdad, Mahmudiyah and other places as they were directed to the holy city of Karbala.
Human Rights Report 1 March – 30 April 2006. UN Assistance Mission for Iraq.

March 17, 2006 – Two civilians were killed and another four injured when a mortar shell fell on houses near a US military base in Mahmudiyah 30 kilometers south of Baghdad on Friday, Iraqi police said, according to DPA. The police said the US military sealed off the region in search of the assailants.

3/17/06 – Later in the day, a roadside bomb went off as a crowd of pilgrims passed in Mahmoudiya, south of Baghdad, wounding five people.

3/26/06 – There were conflicting reports about Sunday’s attack in Najaf, which came a day after the cleric’s Mahdi Army militia forces battled with Sunni insurgents near Mahmoudiya, about 20 miles south of the capital. Seven people most civilians killed in their homes by mortar fire died in the gun battle and several others were wounded.

Other Factoids about Mahmoudiyah
Second Lt. Ilario Pantano was accused of killing two Iraqi men without justification. The Marine General decided not to try Pantano for murder after evidence exonerated him. Where was 2nd Lt. Pantano working when he was faced with the split second decision?...
“The two Iraqis were killed during an April 2004 search outside a suspected terrorist hideout in Mahmudiyah, Iraq.”
*********
"Mohammed Hila Hammad Obeidi (otherwise known as Abu Ayman) was captured by US led Iraqi forces on March 7, 2006. A senior aide to Abu Musab al-Zarqawi, Abu Ayman was formerly the chief of staff of intelligence under the regime of Saddam Hussein and was most recently the leader of the Secret Islamic Army, a secret militia operating in the Babil province. He was captured in a joint US – Iraqi raid in the al-Mahmudiyah neighborhood in southern Baghdad. Abu Ayman was the prime suspect in the abduction of Italian journalist Giuliana Sgrena in Feb. 2005 and is also thought to have been behind some of the insurgency’s most gruesome kidnappings and beheadings of foreigners.

The Secret Islamic Army, consisting of former Republican Guard and Iraqi Intelligence officers as well as Syrian fighters, has focused its attacks in Baghdad, Salman Pak and Mahmudiyah."
******** 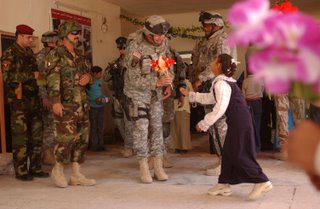 So much for the residents of Mahmudiyah being in an uproar after the alleged rape and murder of an Iraqi young woman and her family… Here is a report dated March 19, 2006 (approx 7-8 days after the “incident”) about the completion of Al Buhaira School in Mahmudiyah.

“Amongst the smiles and shouts of excited children, US and Iraqi military officials came together Monday to celebrate the completion of the Al Buhaira Elementary School remodeling project in Mahmudiyah.”

“During an emotional ceremony held inside the all-girls school, eager students greeted their guests with cheers and applause.”

“Several tearful school officials expressed their inability to adequately thank the soldiers who had made the project possible.”

Doesn’t sound like a community that was witness to the rape and murder as claimed by two eyewitnesses…? You would think that some of the Mahmudiyah officials would have been loathe to celebrate the re-opening of an all girls school with the US military if that was the case…
*******
Remember the eyewitness claim that the insurgents had killed forty American soldiers over 2 days in retaliation for the rape and murder? According to official DOD statistics, 18 brave American soldiers were killed in Iraq from March 12 through March 30, 2006.
http://www.albertarose.org/fallen/06_mar.htm

So there you have a better picture of the city of Mahmoudiyah. Not exactly a "restive" town, huh? Of course the media will paint it as an oasis in the middle of a war zone that was just idyllic until our soldiers trooped it. But we all know better. It's a shame that the US media doesn't...
Posted by Robin at 10:47 PM