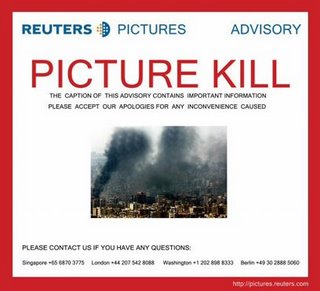 Once again the Blogs have taken over the duties of the mainstream media and have exposed more fake news. Little Green Footballs got the ball rolling yesterday by uncovering evidence of a doctored photo from Al-Reuters. The word came down this AM that Reuters has pulled the photo! Here's a snip from YNet News...

"Reuters withdraws photograph of Beirut after Air Force attack after US blogs, photographers point out 'blatant evidence of manipulation.' Reuters' head of PR says in response, 'Reuters has suspended photographer until investigations are completed into changes made to photograph.' Photographer who sent altered image is same Reuters photographer behind many of images from Qana, which have also been subject of suspicions for being staged."

Edited - I thought this was in response to the fake photo but this happened in May 2006...
Even more disturbing is the email threat that Charles at LGF received from a Reuters server...

The message, sent from a Reuters internet account, read: "I look forward to the day when you pigs get your throats cut."

It was sent to Charles Johnson, owner of the Little Green Footballs (LGF) weblog, a popular site which often backs Israel and highlights jihadist terrorist activities.

NOW - let's start looking deeper into the Qana photos, the Haditha photos and more... So much for the claims of "we don't publish staged photos" and journalistic integrity.
Posted by Robin at 1:02 PM