Murtha Calls for Israel to Cut and Run 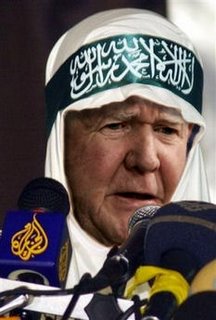 "Mr. Murtha, speaking yesterday at a Post-Gazette editorial board meeting, was asked if he favored a cease-fire in the campaign north of Israel's border.

"I think so," he said. "I think it would be very difficult to justify continuing on."

Referring to the Bush administration's position, he said: "You know, they say, 'Well, we want a long-term cease-fire.' It seems to me you start with a cease-fire, and then you try to work out the details long term. If you don't, and you continue to have heavy-handed military action -- and I support heavy-handed military action because it saves your own troops -- but it creates enemies, and that's the problem we have."

Mr. Murtha said the fighting risked hardening against Israel the "hearts and minds" of Lebanese civilians within the general population, beyond Israel's entrenched enemies in the Shiite militia."

This is Murtha's third strike against the US Military that he once served with. He abandoned our soldiers in Somalia by advocating the pull out before the job was done. He has abandoned our soldiers currently serving in the War on Terror by calling for a pull out. Not to mention the slander Murtha has heaped on our soldiers by rushing to judgment and convicting them before an investigation has barely began.

NOW Murtha has effectively abandoned the memory of the 241 Marines killed by Hezbollah in Lebanon in October 1982. How can a former Marine ever forget that day? All his bullcrap about "having a cease fire and working out the details later" has been done time and time again. It didn't work the other times and it certainly won't work now.

Every time Murtha opens his big fat yap, he slaps another soldier in the face. There is no excuse for his support of the enemies of our country. I think it's time we gave Murtha a Cut and Run that he will never forget - cutting him from Congress and running him out of Washington on a rail. He should never again be allowed to harm our troops while holding the title of United States Congressman.

For more info, check out the following links:
Censure Murtha
Murtha Must Go
Honor the 241 Marines Massacred in Lebanon - incredible site with pictures and factual information regarding this tragedy

And don't forget to stop by Diana Irey's website. I heard her interview on the Sean Hannity Radio Show Friday and was very impressed.
Posted by Robin at 6:50 PM