A Chance to Say Thank You 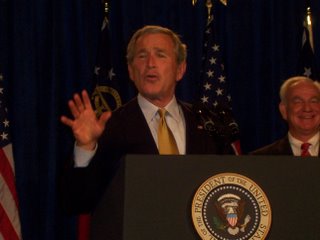 Once in a while we get to experience an event that we know, right at the moment it happens, that we will never forget it. Today I had one of those moments. Even better, I got to share it with my Dad.

Today I went to a fundraiser for Max Burns, candidate for GA's 12th Congressional District. This was not your "typical" fundraiser - the guest speaker was the President of the United States. When I got the invitation, my Dad was in the hospital recuperating from surgery related to his prostate cancer. Of course, he was the first one that popped into my head when I thought about taking a guest.

While it was a long wait with little to no sitting room and hotter than Hades, it was worth every ache in my feet. We were about 10feet away from the podium. When President Bush took the stage, it took my brain several moments to comprehend that this was not a TV image.

President Bush looked different than he appears on TV - much younger and more energetic. He walks with a purpose and holds his head high. Those who call him a "terrible public speaker" were way off the mark today. He spoke forcefully and clearly with lots of hand gestures - not the fake rehearsed gestures you see from politicians -the fingers closed and thumb tucked to avoid pointing your finger. He was relaxed and very much at ease.

The President hit hard on the war on terror including the fact that Democrats and Republicans believed that Saddam Hussein was a threat. He touched briefly on the economy, education, alternative energy and faith based initiatives. The crowd of near 500 interrupted his speech many times with applause and numerous "yeah's" and "here-here's". Not one single heckler - how nice!

When his speech was finished, President Bush literally hopped off the stage and came to the railing to shake hands. It was a moment that I had been hoping for - I got to shake President Bush's hand and tell him "thank you". Just a brief nano-second in time but a chance to tell my President thank you for holding firm and standing up for what is right instead of popular. My Dad also got to shake President Bush's hand. It made my heart swell with pride to hear all of the comments from other guests as they shook the President's hand - "we love you", "you're the best", "great job Mr. President", etc. How nice it must have been for him to hear positive and supportive comments. How nice it was to be with other people that felt the same way I did. But the best part - I got to share it with my Dad.

When we left the Mighty Eighth AirForce Museum, it had been raining. The field where we all had to park was muddy and a mess. One young man was standing beside his truck with the rear tires buried in the mud. I said "that really stinks" to the young man. His response summed it up beautifully - "Yeah but it's okay. I just got to see the President of the United States." What a day!
Posted by Robin at 7:33 PM