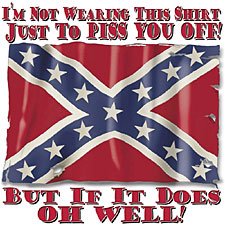 George Allen must really have the DNC scared. I don't know of anyone in this election cycle that has been forced to endure such a massive smear campaign as Sen. Allen. First there was the whole "macaca" brouhaha which was a mountain made out of a molehill. Did anyone point out that the "macaca dude" was a political plant from the Webb campaign who was trolling the Allen campaign trail waiting on any little miscue to post over at YouTube? I think that made the little political operative fair and open game to any verbal response - you want to play dirty, you're gonna get dirty.

We can't forget that Sen. Allen once had the Confederate Battle Flag hanging up in his dorm room. Oh the horror - I bet he even drove a pickup truck with a confederate flag sticker on the window. Honey, grab me the smelling salts cause I feel faint...

Then there was the ridiculous question during the debate questioning Allen's mother's religious heritage. WHAT did that have to do with a political campaign? That of course left an opening for the pious Mr. Webb to throw another Macaca spear at Allen.

NOW we have a member of the anti-tobacco lobby and a former college football teammate of Allen claiming the Senator used the "N-word" in the 70's. Oh my - send Allen straight to jail for that. Good Lord - get a grip! And Kenneth Shelton also has a little story about deer hunting with Allen and using the dead deer head for a racial attack. Here come's PETA now...

Why, after Sen. Allen has already served one term in the Senate, is this coming out now? Seems Mr. Shelton has experienced a "Jim Rassman" moment (the man John Kerry saved in Vietnam but didn't come forward until Kerry needed a boost in the Presidential primary). Here's what the Washington Post wrote about Shelton's sudden memory recall...

Shelton said his recollections were jarred by the recent controversy in which Allen was caught on tape calling a Webb volunteer of Indian descent "macaca."

Yeah - that makes sense... About as much sense as this claim by Mr. Shelton...

Shelton also said Allen gave him the nickname "Wizard" because of a similarity to the name Robert Shelton, a former imperial wizard of the Alabama Knights of the Ku Klux Klan.

That is truly an insult. Sen Allen should have nicknamed Shelton "Bobby" for Sen. Robert Byrd former KKK member.

Then the WaPo closes out the less than reality based article with this little blurb...

The Salon article, which was posted on the Internet Sunday evening, reports that 16 of Allen's former teammates interviewed could not confirm having heard Allen use epithet.

So one former teammate who suddenly pops out of the woodwork and has a political beef with Sen Allen holds more credibility than 16 former teammates? I guess in Salon liberal land it does. How about a campaign on the issues instead of these childish attacks based on issues that are nothing more than mud pies.

Man I guess I have no chance in hell of ever running for political office. I knew using the word "shit" when I was 5 would come back to haunt me.
Posted by Robin at 8:36 PM