Dems Imploding All Over 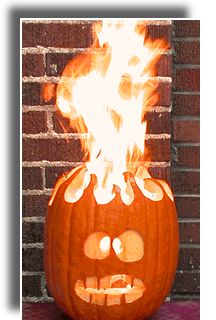 Today was full of treats for the Right thanks to the tricks from the Left. The tightening of the polls must have fried the circuits in some of those on the Left. Just today we've had John Kerry giving the finger to our soldiers while insulting the intelligence of Americans by claiming he was talking about President Bush or it was a "mangled joke". Grab a couple of stones from Teresa and be a man you worthless piece of bombastic pompousity. Take responsibility for what you said and take the heat. Thank God the American people voted to keep you out of the Oval Office. You do have to love this anonymous Congressional Democrat's statement to ABC -

While Kerry was flopping around like a beached fish, a Democratic Lawyer in Maine decided to dress up like Osama Bin Laden and wave a toy gun at passing motorists. I swear I am NOT making this up...

Police in South Portland, Maine, arrested Thomas Connolly, 49, of Scarborough, Maine, and charged him with criminal threatening. He was released on bail, local officials said.

Connolly's previous claim to fame? He was the source for the pre-election October 2000 surprise release of President Bush's drunk driving arrest 20+ years earlier.

Last but not least, there is the case of the Sen. George Allen stalker, Mike Stark, who gets a beat down by Allen staffers after Stark played the DNC tool for the Webb Campaign.

As Senator Allen was exiting a ballroom at the Omni Hotel, UVA Law student Mike Stark stopped the senator and began to ask him questions. Those questions were about whether or not the Senator spit on his first wife.
Stark pushed his way through some staffers and followed the senator out of the main ballroom and into a hallway. That's when one Allen campaign staffer put Stark in a headlock and threw him to the ground. Stark was also removed from the building.

This is not the first time Stark has played the stalker game. Back in August, he followed Sen Allen around to two campaign appearances asking Allen if he ever said "nigger". Now Stark is writing letters to the media decrying his treatment and threatening a lawsuit. He's lucky that he only got a headlock and a takedown. The DUmpers and KOS inmates are rallying behind this turd.

BTW Stark was only following the leaders of the DSCC with their latest attempt to take Allen down. This weekend the DSCC issued a press release demanding the release of Allen's divorce papers and info on two arrest warrants from the 1970's. When you can't win an election on the issues, go back 30 years and start digging.

If this is how the Left reacts to a tight election race, I cannot wait to see the complete and total meltdown when the GOP holds the Congress. The PEST epidemic was nothing compared to what next Wed AM will bring. Pop the popcorn - this will be worth taking a day off from work.
Posted by Robin at 7:55 PM