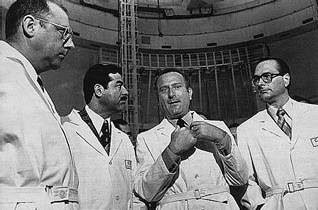 The incredible JVeritas from FreeRepublic is STILL translating those Iraq Documents. Now he has come up with a veritable smoking gun regarding Saddam Hussein's plans to rebuild their nuclear program back in January 2001. Here's the translation:

Beginning of the translation of memo 1 of CMPC-2003-012331.pdf
In the Name of God the Most Merciful the Most Compassionate
The Republic of Iraq, The Presidency of the Republic, The Military Industrialization Committee
Number 2/4/83
Date: 25/1/2001
Secret and Confidential
To: The Atomic Energy Organization- The Office of the Chairman
Subject: Allocation of Degussa Vacuum Furnaces
Please approve the allocation of the mentioned furnaces and quantity (2) with its accessories because of our dire need for it to implement the works and projects tasked to our committee. And we empower engineer Samir Ibrahim for follow up and receiving.
With regards
Signature
Air General
Marahem Sa’aab Al Hassan
Senior Deputy Minister for Military Industrialization
25/1/2001
End of translation of memo 1

Beginning of translation of memo 2 of CMPC-2003-012331.pdf
Mr. Respected General Director
Subject: Allocation of Vacuum Furnaces
Regarding the letter of the Senior Deputy Minister of the Military Industrialization numbered 2/4/83 on 25/1/2001 I would like to clarify the following:
1. We do not have primaries about the subject.
2. There was a communication with the Energy Organization about the furnaces and it was revealed that the furnaces were delivered to the Physics Department in the Atomic Energy Organization upon the instruction of Mr. Chairman of the Energy Organization to take advantage of these equipments ( During the meeting with the President The Leader God protect and shepherd him and the Organization Staff asked his Excellency to take advantage of these equipments) and these equipments were received two moths ago by the Physics Department.
The furnaces do not have the seal of the Agency but it was among the equipments of the previous program that were included in the list prepared by the agency.
Signature
29/1
Shaker Hamed.
End of translation of memo 2

You can read more about the furnaces and Iraq's original plans for the them in this article from August 1989 written by none other than Judith Miller and James Risen...

Don't waste your time checking the mainstream media for articles about this... It doesn't involve a gay congressman, a Hollywood celebrity using his disability to score DNC points or a DNC candidate at a Playboy Superbowl Party. Besides it doesn't play well in the "Bush Lied", "No Credible Threat" talking points issued by the DNC.

As a note of interest - the picture above is from 1976. That's Saddam Hussein (2nd from the left) and Jacques Chirac (far right) on a tour of a French Nuclear Reactor.
Posted by Robin at 6:19 PM