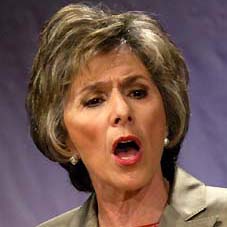 Boy the "good" news just keeps rolling in... I just don't know how much more of this "good" news I can take...

"There's a new environmental policy boss in town, she scowls a lot, and two of her favorite phrases are "global warming" and "extensive hearings."

But Boxer said Tuesday that starting in January, her priority will be to begin "a very long process of extensive hearings" on global warming.

"I think there ought to be a global-warming bill that looks at all the contributors to carbon-dioxide emissions," she said. She cited California's legislation requiring automakers to reduce emissions as "an excellent role model."

Boxer also wants to boost the cleanup of Superfund toxic-waste sites by reinstating "polluter pays" fines, which lapsed under the Bush administration, and increase oversight of the Environmental Protection Agency.

Wonderful - we've got Islamofascists broadcasting their goal of blowing up the White House and we've got Iran with traces of Plutonium. If the focus and resources are placed on global warming hearings, then we'll get to experience the biggest global warming phenomenon to hit the earth since Hiroshima.