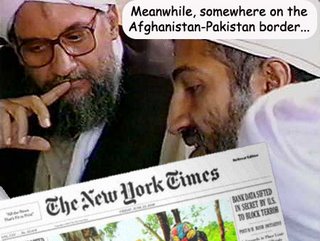 How many more classified reports can the New York Times leak before they are prosecuted for aiding and abetting the enemy? All pretense of being a source of news has been dropped - they are strictly a mouthpiece for the anti-American, anti-Bush forces here in the US.

One again, a classified report makes it to the front page of the NY Times...

The insurgency in Iraq is now self-sustaining financially, raising tens of millions of dollars a year from oil smuggling, kidnapping, counterfeiting, connivance by corrupt Islamic charities and other crimes that the Iraqi government and its American patrons have been largely unable to prevent, a classified United States government report has concluded.

A copy of the seven-page report was made available to The Times by American officials who said the findings could improve understanding of the challenges the United States faces in Iraq.

But the Times wasn't content to just leak the document, they gave outlines of the reports to outside intelligence "experts" to get their take on the report. Wonder if Larry Johnson was one of their experts? If there is a leak, you can count on Leaky Larry to bloviate an opinion or two.

Some terrorism experts outside the government who were given an outline of the report by The Times criticized it as imprecise and speculative. Completed in June, the report was compiled by an interagency working group investigating the financing of militant groups in Iraq.

Notice how the Times' experts never offer positive opinions on any of the leaked info. But that should not come as a surprise to anyone that has followed the treason of the Times.

I do find it quite ironic that the Times actually published a snip about the difficulties of tracking the terrorist financing...

The document tracing the money flows acknowledges that investigators have had limited success in penetrating or choking off terrorist financing networks. The report says American efforts to follow the financing trails have been hamstrung by several factors. They include a weak Iraqi government and its nascent intelligence agencies; a lack of communication between American agencies, and between the Americans and the Iraqis; and the nature of the insurgent economy itself, primarily sustained by couriers carrying cash rather than more easily traceable means involving banks and the hawala money transfer networks traditional in the Middle East.

Now I'm no expert but I think one of the biggest sources of hamstringing is the damn NY Times itself. From the NSA leaks to the bank data mining leaks, the NY Times has exposed many of our key tools for fighting the terrorists. Any program that helps keep America's enemies out of power has become part of the public record thanks to the Times. I can't imagine the terrorists changing their financial tactics after reading a play by play of our classified program (insert dripping sarcasm here)
Posted by Robin at 9:07 PM