What About Fallujah? The Truth from Maj Gen Caldwell 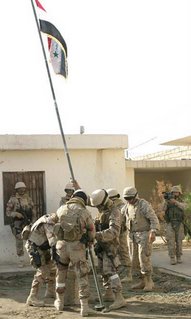 Maj Gen Caldwell has written an article about the status of Fallujah. Remember it was 2 years ago that all hell was breaking loose in Fallujah and our brave Marines were standing their ground. So is it still a hell-hole? If you listened to the media (ahem AP) you would certainly think so. The truth is Fallujah has made quite a turnaround... From "Fallujah Revisited"...

However, my recent visit to Fallujah has reaffirmed my strong conviction that as bad as the situation may sometimes appear, there is still reason to be optimistic for Iraq’s future.

Today, the people of the city are protected by 1,500 members of their own Iraqi Security Force and only 300 Marines. The police are comprised of native Fallujans, and enjoy strong support from the local population. They are able to patrol their own neighborhoods, enforce their own laws, and handle the transition to responsibility for their own security and growth. Despite the sectarian violence which plagues other parts of the country, I saw the commander of the local Iraqi Army unit, a Shi’a, sit and work productively with the local police chief, a Sunni – a relationship few would have believed possible in Fallujah just a year ago.

I attended a city council meeting, where a democratically elected mayor and city council led the deliberations about the peoples’ business.

The hell you say? City council meetings? Sunnis and Shias actually working together? Not according to what I've read and heard in the media. This must be another one of those government produced propaganda pieces cause last I heard people were lying dead in the streets of Fallujah while dogs ate the bodies. Last I heard the people of Fallujah refused to come back and the city was overrun with insurgents. Could it be that the media has been wrong all along?

And for those nattering nabobs of negativity, Maj Gen Caldwell's article was not just a glass half full view...

Difficult times remain ahead for the U.S. and Coalition Forces in Iraq. Many sacrifices remain to be made by both U.S.servicemen and women and their Iraqi partners in Fallujah. But the city is an example of what can be achieved when courageous leaders, brave security forces, and hard-working citizens unite for a common goal – a secure and unified future. The progress in Fallujah demonstrates that with time and effort, recovery is possible in Iraq in the wake of brutal violence.

Imagine that - the media reported the negative and completely overlooked the positive. When was the last time you heard about a City Council Meeting in Iraq from our one-focus media? I'm shocked - just shocked I tell you... The next time you read or hear a story about Iraq in flames with dogs and cats living together, pop over to Centcom.mil and see what the truth is. I guarantee you it will be quite different.

Picture above courtesy of Centcom... Soldiers from the Iraqi Special Forces, Shawanis Brigade, raise the Iraqi National Flag in front of the office of the Mayor of Fallujah, Nov. 10.
Posted by Robin at 9:26 PM