Supporting the Troops When Its Convenient 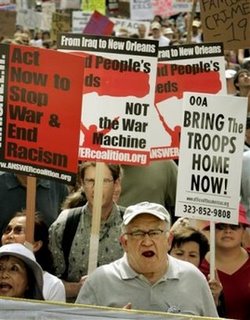 There is nothing more hypocritical, even disgusting, than a Hollywood lefty that has spent years beating up on America only to turn into a troop supporter when it involves a movie they are hawking. Just like the BDS'ers that wail "we support the troops but not the mission", you can't blame America for all the ills in the world then profess to be concerned about troop morale.

Take Ed Asner (please)... He is now promoting his latest flick, a Hallmark movie "The Christmas Card", about a soldier serving in the war on terror who receives a greeting card that ultimately changes his life. Part of the promotion of the movie involves visiting the troops at Walter Reed and promoting Cards for Troops. While the hospital visits and the Cards for Troops are a wonderful way to remind out soldiers serving our country that we support them, it is a crock to have Asner as one of the spokesmen. Here's what Asner said...

"The unwavering dedication these men and women show for their cause _ and each other _ is remarkable beyond words," he said. "Their thoughts are never for themselves, but only for those comrades that are still in harm's way."

Funny - Asner has never really exhibited much support for the soldiers over all these many years.

LA Weekly April 2006 -
"In addition to belonging to the American Civil Liberties Union, Defenders of Wildlife and the California Clean Money Campaign, he’s an active supporter of Heifer International, an Arkansas-based charity supporting Third World agriculture, as well as Office of the Americas, an L.A.-based nonprofit that documents and analyzes human-rights abuses across the Americas, and Not in Our Name, the New York–based anti-war group. Asner has also been a tireless speaker at anti-war rallies since the U.S./U.K.’s most recent invasion of Iraq."

Democracy Now - October 2004
"The seeds of chaos, however, were planted at the very time of the U.S. invasion, when G.I.'s did nothing to stop hoards of looters from destroying Iraqi institutions."

12/17/05
Iraqi terrorist attacks are ultimately the fault of the U.S. "Our presence in the region created the resistance in the first place, and now we are actually impeding progress."

And we certainly can't forget that Asner doesn't support the war on terror including the war in Iraq...

BuzzFlash Interview - October 2005
"You can't top the invasion of Iraq. We have seen in the Downing Street Memos, which exposed British complicity, that the reasons for invading Iraq were totally fabricated.
The war has since proven to be a lie from the beginning to the end, with the final rationale that we freed Iraqis from the tyranny of Saddam Hussein."

NewsMax - Dec 2003
"The stalwart leftist actor explained that America's interest in deposing Saddam was merely because the dictator is a person of color.
"There's total Islamic fascism. I also think that there is a strong streak of racism, and whenever we engage in foreign adventures our whole history in regime change has been of people of different color."

12/27/2005
"Unfortunately," Asner said, "President Bush made it easy for 9/11 to happen, and then exploited that tragedy to sell an unnecessary war and further his own re-election. Remarkable, but true."

Letter to Peace & Justice Activists April 2004
"I would like to suggest to you emphatically that the 9-11 truth movement is the most pressing issue of the peace & justice movement today. Here is why. 9-11 has been used to justify "endless war" and a continual rollback in civil liberties that seems to have no end in sight. Yet, 9-11 remains the least examined tragedy in modern American history."

One reporter actually asked Asner about how his anti-war views may affect the soldiers he claims to support...

Deseret News - Dec. 1 2006:
"Question: You've been outspoken about your opposition to the war in Iraq. Do you think that affects the troops over there?

Asner: Well, for those who realize that they should never have been put in this position, I suppose they are glad that somebody is on the other side agreeing with them. For those who continue to believe that Saddam (Hussein) was connected to Osama bin Laden, that there were WMDs, that he was a threat to our freedom, I suppose they find me counterproductive or destructive."

Yes - Ed Asner admitted that his words and actions have impacted the morale of those soldiers that don't support his views on the war in Iraq. But you don't see this mentioned in the puff pieces that are kissing Asner's feet for one little act of support. Yet Asner had the cajones to actually say the following...

"During the holiday season there's no better way to lift the troops' spirits than to send them cards and letters carrying warm wishes from home," said Asner, who appears on NBC's "Studio 60 on the Sunset Strip."

Yeah - and during the remainder of the year there's no better way to lift the troops' spirits than to shut your big fat piehole and stop undermining their mission, their Commander in Chief and their Country.