THIS is the Problem in Iraq 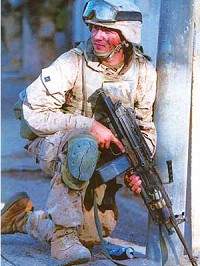 We've got special study groups trying to determine what we need to do in Iraq. God knows how much we paid these pampered desk jockeys to pull together more terrorist appeasing crap. Want to know what the problem is in Iraq? I'll tell you and my opinion won't cost the taxpayers a damn dime.

THIS is the problem in Iraq...

SAN DIEGO - About six Marines will likely be charged in the killing of 24 civilians in the Iraqi town of Haditha, a congressman said Wednesday.
Rep. Mark Udall, D-Colo., did not know the charges but said they were serious.
Rep. Silvestre Reyes, D-Texas, said the military would file charges in weeks, not days. He declined to be more specific about the timing.
The congressmen spoke after Lt. Gen. Richard Natonski gave a one-hour, closed-door briefing to the House Armed Services Committee on the military's investigations into the deaths and the likely next steps.

If we let our soldiers fight a war, instead of making sure Emily Post's Rules of War Etiquette were followed, this thing might have been over months ago. Instead of crying about a dead terrorist, we should be crowing that another jihadist got to meet his 72 virgins. Let the soldiers fight and let the interrogators interrogate. Let the political hacks and the spineless cowards cry all they want. If they want a nicety nice war, let them go fight the damn thing. Let them stand in the middle of a street handing out candy to children while snipers try to pick them off. Let them spare a woman only to have the woman pull an AK outta her burka and shoot his brothers. Well see how long the Geneva Conventions last then.

When I read an article, like the one below, I just want to vomit. What have we done to our soldiers? Support them? Hell we don't even give them the same courtesies that the PC crowd wants to give the terrorists.

Lance Cpl. Justin Sharratt is among the Marines from the 3rd Battalion, 1st Marine Regiment, implicated in the Nov. 19, 2005, killings of 24 Iraqis in Haditha, some of them unarmed women and children.

But it was comments made by U.S. Rep. John Murtha, D-Johnstown, in May about the Haditha incident that compelled them to go public. "He said they killed innocent civilians in cold blood right on TV," Theresa Sharratt said. "It was on every channel, slapping our face every time we turned on the TV."

Darryl Sharratt wiped at tears and blasted Murtha for his failure to uphold the sacred American right that each person is innocent until proven guilty. Murtha, he said, called the Haditha incident a rampage. He characterized it as a massacre. "He's called them murderers," Darryl Sharratt said, adding that these accusations were made despite the fact no criminal charges had been filed.

And the Marines, he said, have done little to help. "The Marine Corps has deserted him," Darryl Sharratt said.

My heart aches for this family and soldier. (the picture above is Lance Cpl Sharratt on patrol in Fallujah). My heart aches for every soldier and family member including those who have given the ultimate sacrifice for this country. Instead of pondering how many soldiers we could have saved with better body armor (which was a fake issue), try to determine how many soldiers we could have saved if we had let them do the job they volunteered to do. You'll never see this discussed by any ass-kissing terrorist study group.

BTW Diana Irey who lost to Murtha because the constituents in that district are obviously a few bricks short of a load, had the best comment I have heard about Murtha's vomitous spew. It's a shame that the media only now gives her some notice...

Soldiers, she said, already are fighting for their lives. They shouldn't have to fight for their reputation.

You're damned right Mrs. Irey. It's a shame that the PC crowd would rather worry about the terrorists' reputation than our own soldiers. Appeasement never got us anything - except for the WTC I, Khobar Towers, the African Embassies, the Cole and September 11, 2001.

Update:
Mike's America has an incredible post up about WHY we should never forget the lessons learned on this day 65 years ago. It is truly a MUST Read...
Posted by Robin at 8:10 PM