Defense Fund for the Haditha Marines 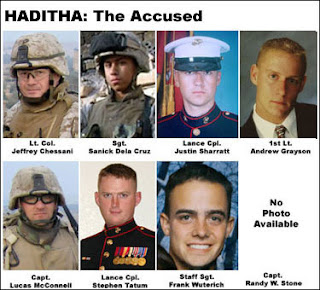 A defense fund has been set up for the Marines accused of crimes in the Haditha incident. (Key word here is ACCUSED which the media tends to forget). The money donated goes toward the civilian defense expenses for our soldiers. Here's the info:

Also there is a great website by some fellow FReepers that has the ultimate listing of links and photos related to the Haditha Marines. Stop by and get the WHOLE story - not the manufactured pablum that is being spewed by the media. The site is They Are Not Killers/Defend our Marines.

And here's a little reminder of one of injured children talking about waiting for the IED that started the whole incident to explode... Courtesy of NewsMax from June 2006:

In a CNN interview broadcast Wednesday, Safa Younis - who says eight members of her family were killed by U.S. troops - recalled that she was getting ready for school as the Marine Humvee approached.
"I was planning to go to school. I was about to go out of bed. I knew the bomb would explode so I covered my ears," the youngster said, according to a CNN translator.
"The bomb [then] exploded," she explained. "The bomb struck an armored vehicle. I don't know if it was a Humvee or an armored vehicle. When the bomb exploded, they came straight to my house."
Posted by Robin at 5:51 PM