WHO IS IN CHARGE OF THIS COUNTRY??? 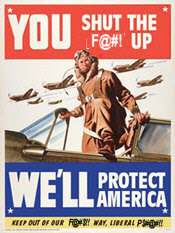 I must admit that I am sitting here seething and my blood pressure has got to be shooting through the roof. I just read the text of Jim Webb's Democratic Response on Drudge and it is without a doubt the most disgusting piece of drivel that ever came outta the mouth of a SOTU responder. Drudge has it embargoed until 8:45pm or I'd post the whole damned thing here. Needless to say, Webb invokes his Vietnam Service ala John Kerry. And he makes mention of his son serving in Iraq (funny I thought that was just between him and his boy?).

Webb will say that our President "took us into this war recklessly. He disregarded warnings from the national security adviser during the first Gulf War, the chief of staff of the army, two former commanding generals of the Central Command, whose jurisdiction includes Iraq, the director of operations on the Joint Chiefs of Staff, and many, many others with great integrity and long experience in national security affairs."

No - what is reckless is the stupid white flag of non-binding resolutions and giving the terrorists an excuse to ramp up the violence so us "weak kneed Americans" will run like scalded dogs. What is reckless is the continuous undermining of our President, our soldiers and our Country by the Democratic Socialists and their media comrades.

Webb will close his screed with this...

Tonight we are calling on this President to take similar action, in both areas. If he does, we will join him. If he does not, we will be showing him the way.

Hey you pompous blowhard nasty little pervert -You gotta have a plan before you can show someone the way...

And in related news, here is this from an article on Breitbart...

Democrats are trying to drown out President George Bush's State of the Union message by making clear he and his Republican allies are no longer in charge of national policy, especially on Iraq.

Please someone give this idiots a copy of the Constitution and explain the powers of the Executive Branch. Until you are elected President of the United States, you are NOT in charge of this country and I will work day and night to keep the Democratic Socialists OUT of the Oval Office.

And to all you jackasses that decided to teach Republicans a lesson in this past election - THANKS A BUNCH.