Chief Justice Roberts Falls - Where was Chuck Schumer? Updated - More Than a Fall 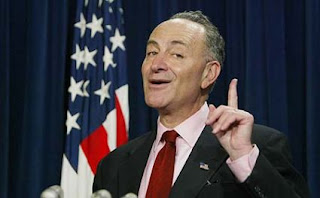 Updated 2030... Fox News is reporting that Chief Justice Roberts had a seizure and will remain in the hospital for observation. Prayers up for his quick recovery.
**********
Oh dear Aunt Mary - the irony.... Chuck Schumer goes on tour talking about how the Senate should not confirm any Supreme Court Justices put up by the Bush Administration unless it was an "extraordinary circumstance". THEN Chief Justice Roberts takes a spill while on vacation and is hospitalized.

WASHINGTON - Chief Justice John Roberts was taken to a hospital in Maine on Monday after falling while on vacation, the Supreme Court told NBC News.
Roberts, 52, fell at his summer home between 2 and 3 p.m. ET off Port Clyde. The court said he was taken to a hospital as a precaution.
An emergency medical technician said Roberts was conscious and alert during the ambulance ride, NBC News' Pete Williams reported.

The question now is where was Chuck and how much did he know? I bet the TV hogging Senator pooped his pants when he heard the breaking news... Be careful now Chuck - that karma can be quite a bitch.
Posted by Robin at 4:58 PM