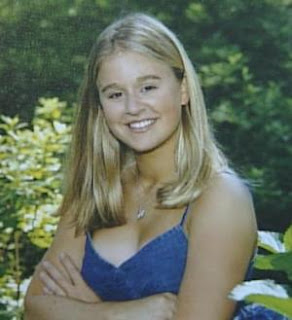 I've not said much about convicted cop killer Troy Anthony Davis' family in my posts about his death penalty case. Davis' family are victims too albeit living ones as compared to Office Mark McPhail. But while researching this case I came across some vile and completely false statements made against a murdered young Savannah woman in an attempt to play the race card in this whole farce of justice.

Martina Correia, who identified herself as Davis' sister, made the following comments in response to an article from The Vibe...

This is bigger than Troy Anthony Davis, when a drug deal went bad last year and a 19 year old caucasion lady was killed a prominent white male in Savannah said if you want to solve crime in Savannah, you must build a fence around the Projects.

The "19 year old caucasian lady" Correia referred to is Jennifer Ross (pictured above). Jennifer was walking with friends through a park in downtown Savannah on Christmas Eve. They had attended the Christmas Cotillion earlier in the evening - a tradition in Savannah. Then tragedy struck...

Ross, a 19-year-old Mercer University sophomore, was shot in the back during a botched armed robbery near Orleans Square in the early hours of Dec. 24. She died New Year's Day on the operating table at Memorial Health University Medical Center, where surgeons tried frantically to save her life.

This was no drug deal gone bad. It was simply a case of being in the wrong place at the wrong time and getting targeted by a group of thugs who admitted cruising for victims that night. Jennifer was shot in the back when she refused to give up her purse.

This is what Jennifer's Mom had to say during the victim impact statement...

Ross's death "shouldn't have happened," her mother read from her statement. "She was not engaged in risky behavior. She was walking on the morning of Christmas Eve with three friends, across a Savannah square, which they had crossed countless times during their lives."

Ross' murderers attempted to play the race card. Here's what a Savannah Morning News reporter experienced during a jailhouse interview with the creep who fired the fatal shot...

"I don't talk to police because they're crooked," Thorpe said. "I have no idea why they think I did it."

Then he hung up the phone, partly pulled down his pants and pressed his behind against the glass separating visitors from inmates.

The convicted murderers were far from innocent choirboys singled out because of their race...

Kevin Huckabee, 20, was already in Chatham County jail on unrelated theft by receiving and probation violation charges when he was charged in the Christmas Eve shooting, according to the Chatham County Sheriff's Department.

Thorpe, 25, has been arrested more than 10 times since 1999 on charges ranging from sexual battery to theft by receiving to criminal trespass.
In August 2005, Thunderbolt Police arrested him in connection with an armed robbery. But a judge later dismissed that charge after the victim could not identify Thorpe, said Thunderbolt Police Chief Irene Pennington.

After the verdict was read, the murderers continued with their thuggish behavior...

During the interruption, Huckabee had to be encircled by four deputies, apparently after he uttered an obscenity aimed at Assistant District Attorney Christy Barker and attempted to move from the defense table.
Thorpe also cursed Barker while being led to the lockup, and deputies rushed him through the door.

I read the reports and could not find any reference to a comment about fencing the projects as claimed by Ms. Correia.

There is no "bigger picture" here. The Ross case was not about race - it was about murder.

But playing the race card is the specialty for those attempting to have Davis' death penalty commuted. Davis threw the card out himself...

Davis has claimed that the motivation behind his lack of a "fair trial" has been racism. "During my trial I realized that, when it all came out only the color of my skin, determined how much justice I would receive and the color of the victim would determine my punishment," he wrote on his website.

Shame on Ms. Correia for lying about the Ross case just to try to score some racial clemency points for her brother. Jennifer Ross was a victim of a senseless murder by a group of young black men who had no business being on the street in the first place. Yes Jennifer was white but does that make the murderers any more guilty? No.

This attempt to portray Savannah police, the Savannah Court System and Savannah citizens as racists who finger innocent black men just because of the color of their skin is beyond reprehensible. The case against Troy Anthony Davis is not about race - it's about the murder of a Savannah Police Officer who still had his gun secured in the holster.

How do u kno it wasn't a drug deal? Also Jennifer's family owned slaves, so that purse belonged to the brothers who claimed it as reparations. Our community is relieved that Racist Savannah Police Regime Terrorist Mark McPhail no longer has opportunity to racially terrorize and racially profile our people. We will NEVER forget brother Troy Davis' sacrifice.

How do we know it wasn't a fight over who has nicer shoes, or a football rivalry, or maybe the murderers were pissed off because the innocent people they murdered when they committed the MURDER won first prize in the pie baking contest over them? How do we know?? I doubt you follow my motive in illustrating your illogical "argument," but in the unfathomable event you actually do then you're welcome, you've now learned how logic does and does not work. If Jennifer's family owned slaves then I suppose her mom and pop must be like 160 years old, that's AMAZING! Also, even if her family had been slave owners 160 years ago what the hell does that matter in her MURDER? You're simple, I'll bet you fashion yourself an intellectual, however, which is sad because you're going to go throughout life being disappointed when you get shot down both to your face and behind your back and go on thinking it's all because someone's great-great-great-great-great grandfather might have owned slaves. I don't laugh at you however, I never laugh at those I pity. Good luck!

Owned slaves....really? My family was slaves too 100+ years ago. You don't get a free pass to be a thug because someone did your ancestors wrong. That's ignorance.

Owned slaves....really? My family was slaves too 100+ years ago. You don't get a free pass to be a thug because someone did your ancestors wrong. That's ignorance.