CNN has a story up about the Sky Eagle drone that flew over Haditha that dreadful day in November 2005. Attached to the story are snips from the drone video. This is the first time the video has been made public. You can see the video here. 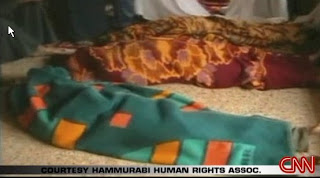 Just a few notes about the video - the footage of the bodies wrapped in blankets is marked "Hammurabi Human Rights Assoc". There is no "organization" - only two men who have documented ties to terrorist/insurgent activities. Also - the bodies were removed from the morgue and the body bags then take back to the house and wrapped in blankets. The scene was a staged production - similar to Qana II. 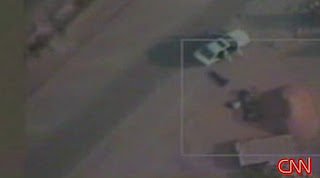 The drone also has images of the "white taxi" - which is not labeled as a taxi - with the bodies of the Iraqis next to it. Unfortunately there is no way to zoom in to get a closer look. This is the main area of testimony at Sgt. Wuterich's Article 32 hearing this past week.

Now you would think that CNN would let the drone video speak for itself - if they were a reputable news organization. BUT we know better. The Haditha Incident is still too juicy a story for an org like CNN to play it straight. So the video is inserted into a news report with the obligatory comments by self-proclaimed expert Gary Solis.

Solis could not resist a chance to demonstrate his support of his brother Marines...

But while prosecutors may be having a hard time winning convictions, Solis believes someone should be accountable for the 24 civilian deaths in Haditha.
"It be would be difficult to say justice has been served if no one is convicted in Haditha," he said.

WTF? Justice is only served if someone is found guilty of a non-crime? What about justice for the Marines? Frankly I'm sick of hearing about 24 "civilians" - there were 4 insurgents in the house cleared by Sharratt and Wuterich. The five "students" in the taxi were not simply "innocent little school boys". No claims by all the Haditha residents in the world would change my mind on that. Too many intelligence reports, too many coincidences - just happened to drive up on an IED ambush early on a Sat morning in a town roiling with terrorists?

Solis then tries to protray himself as the knower of all Marine knowledge...

Solis, who analyzed the video for CNN, said the intense fighting and necessity of making split-second decisions could play out in favor of defendants in the case.
"You have a military jury, probably most of whom, if not all of whom, will have been in Iraq," he said.

Hey Mr. Expert - there is no damned jury in the article 32 hearings. Stick to the facts and quit trying to talk out both of sides of your mouth. Take a stand and stick with it. You can't be sympathetic to the insurgents in Haditha and support the Marines in this case.

CNN tossed in this little tidbit of analysis into their article...

The video appears to show that, throughout that day, Marines engaged in fierce firefights and called in air strikes to level buildings -- often with no definitive idea of who was inside.

Well of course the Marines didn't know the people in the buildings by name. They didn't use the white pages of the phone book to see who lived at which residence. All the Marines knew was they were taking fire from the houses. THAT is as definitive as they needed to take action.

CNN perpetuates the myth that the whole situation was swept under the rug until March...

The service launched its investigation into the killings in March 2006, after an Iraqi human-rights group raised allegations that the Marines had gone on a house-to-house rampage after the bombing, and brought charges the following December.

Not one mention of the after action reviews, reports, etc done by the Marines that are well documented. But those don't count cause they were not done by a koolaid swilling terrorist enabler like Tim McGirk.

Here's a sampling of other inflammatory statements against the Marines courtesy of CNN...

The Scan Eagle arrived about 30 minutes after the initial bomb attack on the Marines and does not show the the civilians being killed.

I am sick and tired of the media twisting the facts in this case to fit the "bad Marines" template. Until they are all held accountable, this crap will continue. There needs to be public outrage - not just on the blogs. I've tried to get the story out without much success (see the first of my series on the accusations leveled against the Marines by various organizations including the media). The truth doesn't make headlines - only the claims of murder.
Posted by Robin at 9:46 AM