I've always wondered what a human fruitcake looks like and now I know... 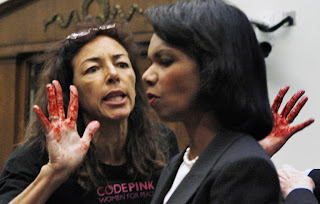 Doesn't Desiree look like she's doing a rendition of Sissy Spacek in the shower scene in "Carrie"?

Desiree should thank her lucky stars that Condi Rice is such a lady cause I would have popped her right in the mouth and screamed self defense.

BTW - maybe we should take a clue from Canada...

Q Dana, this morning Secretary Rice testified in front of the House Foreign Relations Committee and said that errors were made in the case of Maher Arar -- the rendition of Arar to Syria, where he was tortured, and that changes have to be made. Is the White House aware of this? And if so, what sort of changes is the administration thinking of in cases of rendition?

MS. PERINO: I'm not -- I didn't have a chance to see her testimony because I was in the Cabinet Room, so we'll have to get back to you. And I would also note -- I saw a picture from that hearing where a lady in Code Pink with red painted on her hands disrupted the hearing. And I think it's despicable. And unfortunately, it seems that increasingly Congress is being run by Code Pink. We do thank Chairman Lantos for trying to restore order to that hearing.

I bet Dana would have kicked this Pinko's butt in a heartbeat.