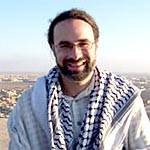 I've read many stories and articles from Iraq by "independent" reporter Dahr Jamail. For some reason, he's flown under the radar on the right while leading the charge against American Imperialist Occupiers for the left. Don't believe me - google "war crimes" and "american military in Iraq". Most of the items will either have a Dahr Jamail byline or have a statement from him in the story or will have a trail of crumbs leading back to this rat's lair.

Take for instance the Fallujah White Phosphorus debunked claims - this was the "journalist" that beat the hell outta that dead horse and continues to do so. In fact, Jamail drove the damn bus on the Fallujah massacre claims - and not one single tinfoil hat wearing minion questioned his claims. If a bomb went off in Iraq and civilians were killed, you could count on a dispatch from Dahr Jamail pointing out America's complicity in the act.

Here's a sample of some of the reporting from Dahr Jamail...
The 'Ceasefire' in Fallujah
Iraq: The Devastation
Ignoring the Air War
Torture as National Policy
U.S. Lays Waste to Another Iraqi City
Government Death Squads Ravaging Baghdad
No Safety for Women in Iraq
Iraqis Are Running Out of Food

I hazard to say this because Lord knows he doesn't need anything more to inflate his ego but... I think a lot of the mainstream media reports focusing on the negatives from Iraq have been spurred by Jamail's tall tales. Whenever you hear Dick Durbin, Dennis Kucinich, John Conyers or any other anti-war Congressmen talk about how "bad" things are going in Iraq, I believe they are using Jamail as their source. Think about the stories and claims from Congressional leaders and look at the titles of some of Jamail's reports - there is a sick similarity that reeks of complicity.

But now Mr. War Crimes Reporter has written a book and is giving speaking engagements to the drooling masses who sucked up his drivel for the past 5 years. And like I've said before, give some of these people a long enough rope and they will hang themselves. They get so caught up in their self-importance that their mouth is engaged before their brain kicks in. Kinda like Adam Kokesh and the "islamic terrorists are fascist extremists not islamo-fascists".

In one interview Jamail relates how he uses Iraqis with fake names as the primary sources of his stories...

But Jamail will be the first to tell you he doesn't work alone. In fact, his story bylines don't even list him, but rather two Iraqi freelance journalists with whom he collaborates. "Ali Al-Fadhily" and "Ahmed Ali" (aliases to protect themselves) were befriended by Jamail during his time in Iraq.

Today, Jamail works out of his Berkeley, California office but is in daily contact with Al-Fadhily and Ali, serving as their editor and fact-checker for stories they file by e-mail and phone. Jamail's job, he explains, is to support, facilitate, and amplify the work of Al-Fadhily and Ali. Al-Fadhily has also written for Al-Jazeera and other Arabic media outlets.

Iraqi stories for IPS are shaped in two ways. Al-Fadhily and Ali, based in Baghdad and Baquba respectively, follow current stories and file them by e-mail to Jamail or else he writes to the Iraqis and suggests stories based on his own research.

Jamail trusts Al-Fadhily and Ali to judge which stories are most timely. Thanks to the 11-hour time difference between the U.S. West Coast and Iraq, he is often able to file breaking stories on the morning they occur.

My oh My - sources with aliases serving as the "reporters" while Jamail does the "fact-checking"? Sitting in Berkley while churning out 3rd person war crimes claims? How convenient. It's difficult to refute claims from "no-named" sources - gives the writer enough plausable deniability should anyone decide to dig deeper for the truth too. Shouldn't that raise a red flag for anyone seeking to inform people about the truth? Nah - we're talking agenda-driven here... anything that fits the template for failure, right?

Jamail's unembedded reporting from Iraq was praised by producer, director and executive editor of MediaChannel.org Danny Schechter as model reporting.

"When journalism failed to inform us, Dahr Jamail decided to become a journalist. He went to Iraq and sought out the experience of ordinary Iraqis when others relied on 'official sources.'"

Calling Jamail "gutsy but never flamboyant, careful but courageous," Schechter said Jamail reported what he saw, respected his sources, and told the truth.

"When the history of media complicity in this war is finally written, Dahr Jamail will stand out as a conscience and caretaker of journalistic principles," Schechter said

Dear Martha - I think I just threw up a little in my mouth...

But not to worry - Jamail is still cheerleading for the resistance in Iraq and crossing his fingers for America to fail...

Jamail adds, with a hint of optimism, "I think we are in an amazing period where the darker things get, the more horrible they become, right along with that, never before have more people been waking up to the reality of the U.S. Empire Project and what it costs, not just Americans, but the world. It is a failed policy and it has to change."

While Jamail pats himself on the back and the lemmings on the left throw roses at his feet, I'm waiting on a response from the command at Ft. Drum regarding his latest claims in the article "US soldiers shy from battle in Iraq". Since he used members of IVAW as his sources, the claims are doubly suspect. Ft. Drum has promised me a response by Tuesday so I'll let you know what I uncover.

While we're waiting for a response, take a moment to read Jamail's testimony at Ramsey Clark's War Crimes Tribunal in Iraq about "Iraqi Hospitals Ailing Under Occupation" to get a true feel of where this "reporter" is coming from...

An impossibility to sit on a field phoning it in. All army (dont know about marines)military vehicles are equipped with either BFT (Blue Force Tracker) or FBCB2 (Force XXI Battle Command Brigade and Below). The position of every vehicle is tracked by someone at all times. That tells me that these soldiers have not been to Iraq or been there and stayed at the FOB (FOBit). ANyone who has gone out on patrol, knows about FBCB2.

UPDATE:
Interesting to note - IVAW no longer has Phil Aliff, Eli Wright or Nathan Lewis listed under their "Member Profiles" section... Could a scrubbing be in progress? Too late - there's always the good old Wayback Machine.
Posted by Robin at 6:25 AM