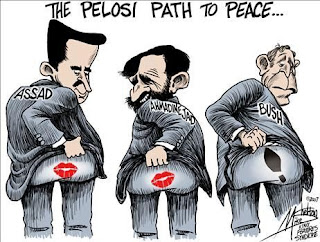 Now that things are looking better in Iraq, the Dems realize that time is running out in their quest to make the war in Iraq a failure of the Bush Administration...

House Speaker Nancy Pelosi said the House will vote as early as tomorrow on a $50 billion measure funding the Iraq war for four months, while also setting a goal of bringing U.S. troops home within a year.

Pelosi said the measure would provide four months of funding while also requiring that any U.S. troops remaining in the country focus on improving security rather than waging war.

``This is not a blank check for the president,'' Pelosi said.

Is it possible to have Congressional approval ratings in negative numbers? I certainly hope so. Grab your pen President Bush and show these fools who is still in charge!
Posted by Robin at 1:38 PM