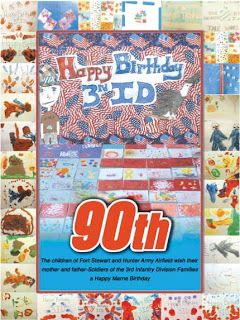 Today is the 90th birthday of the 3rd Infantry Division. Since April 25, 1996, Ft Stewart GA has been the proud home of the 3rd ID.

Remember April 5, 2003 - the American tanks circling through Baghdad? That was the 3rd ID. The 3rd Infantry Division is on it's 3rd deployment to Iraq.

Members of the 3rd ID are called the Dog Faced Soldiers. Here's a little background about "Rocky" the mascot...

All it cost was one dollar. The bull-dog face soldier is the result of an exchange of letters between General Connor and Walt Disney Productions. In one of his letters to Disney, General Connor explained: "For many years, the 3rd Infantry Division has been seeking a trademark based on the symbolism of the "Dog Face Soldier." The term "dog face," he continued, "is an old one in our Army, dating back to the Indian Wars."

The division received the final design of the bull-dog face soldier in August 1965. Along with the drawing came a contract granting exclusive and perpetual right and license to reproduce the drawing. The one dollar bill provided by the Marne Association was autographed by the division's Sergeants Major. Along with the autographed bill, which was framed, a letter of thanks to Walt Disney and his staff was sent for bringing to life the verbal conception of a song.

Thank You Dog Faced Soldiers - The ones currently serving and those that served previously. We all owe you a debt of gratitude.
Posted by Robin at 3:48 PM