There's Only One Broom Hillary Knows About...

I am sick.... sick and tired of Hillary Clinton pretending to know something about being a "regular" woman. The remarks about baking cookies and being a Mom were bad enough but now she's talking about cleaning house when she gets to the White House...

Clinton speaking in West Burlington, IA, told a story about how she is going to clean up the White House. Telling it, Clinton rested her hand on her head and said "oh my goodness I feel like we are going to get into the White House again and we are going to walk around and say where do we start to clean up this mess?" Clinton remembered an audience member who shouted once out when she told this story before - "that's what women are good at cleaning up the mess." Clinton said "bring your vacum cleaners bring your brushes bring your brooms bring your mops."

Bring your brushes and mops? When was the last time Hillary Clinton actually scrubbed a toilet? Swept the kitchen? Mopped up tracked in mud? Hell when was the last time Hillary wiped a runny nose, unclogged a toilet, balanced a checkbook, shopped for groceries or actually turned on a damned oven? This portrayal of the Queen of Mean as a typical "woman" wears on my last nerve. It's an insult to women who have spent their lives working at a real job, raising kids, taking care of a household and spouse.

I have a suggestion for the next Hillary townhall meeting - How about someone asking questions about household cleaners, stain removal, colic treatments, etc? Let's see how smart the "smartest woman in the world" really is...

And while we're talking about Hillary's womanhood - no REAL woman would put up with a lying cheating husband just to get ahead in the political world. I booted my ex out the door and raised my kids without a second thought.

There is only one broom that Hillary knows how to use and that's the one that she hops on every day to ride into work... 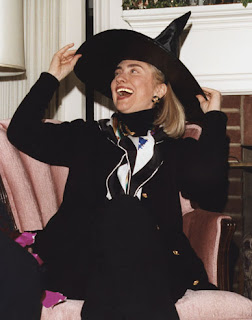 Updated: Michelle Malkin is blogging about Hillary the Housemaid.
Posted by Robin at 10:13 AM