Huck's Got a Muzzle Problem 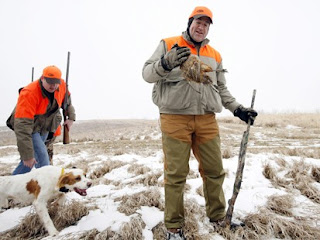 Mike Huckabee has a problem with his muzzle in more ways than one. First he came darned near close to having a Cheney Hunting Incident....

Any good sportsman, though, couldn’t miss a distinctly Cheneyesque moment in the press accounts of the former Arkansas governor’s morning hunt: At one point, Huckabee’s party turned toward a cluster of reporters and cameramen and, when they kicked up a pheasant, fired shotgun blasts over the group’s heads.

My colleague James Oliphant reports that Huckabee’s party was about 75 yards away from the press corps Wednesday when a pheasant jumped up and flew toward the reporters, drawing several shots. “That was too close,” he reports a cameraman saying.

Then there is Huck's other muzzle problem - his own mouth...

ORLANDO, FLA. -- With about 150 supporters crowded around a podium set up on the tarmac of Orlando Executive airport (and about 20 Ron Paul supporters waving signs outside) Mike Huckabee strode out to the strains of “Right Now” by Van Halen and immediately addressed the Bhutto situation, expressing “our sincere concern and apologies for what has happened in Pakistan.”

He made a bad choice of words when saying the U.S. needs to consider “what impact does it have on whether or not there’s going to be martial law continuing in Pakistan.” He should have said whether or not martial law will be reinstated – it was lifted nearly two weeks ago. A minor slip, maybe, but not a subject he wants to mess up on when he is already considered weak in the area of foreign policy.

Now Huckabee's camp has come out with an explanation and clarification for both of the inept statements but when you are President of the United States you don't get a chance for a do-over. My gut still tells me to steer clear from Huckabee and my instincts have usually been dead on.
Posted by Robin at 1:15 PM