Two Anti-American Groups Use Hands to Spread Their Message.

First from the terrorists in Iraq -

U.S. authorities in Baghdad have received five severed fingers belonging to four Americans and an Austrian who were taken hostage more than a year ago in Iraq , U.S. officials said Wednesday.

The FBI is investigating the grisly development, and the families of the five kidnapped contractors have been notified, American officials said on condition of anonymity because they weren't authorized to discuss the case publicly.

Authorities confirmed that the fingers belonged to hostages Jonathon Cote , of Gainesville, Fla.; Joshua Munns , of Redding, Calif. ; Paul Johnson Reuben , of Buffalo, Minn. ; Bert Nussbaumer of Vienna, Austria ; and Ronald J. Withrow , an American who was kidnapped separately from the others.

Then CodePink gives Condi the red-hand treatment - AGAIN and with the blessings of Rep. Nita Lowey (yes - a Democrat)... 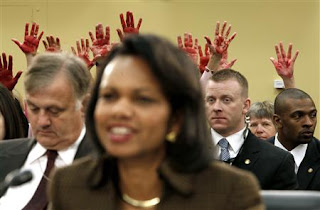 Chanting "war criminal," anti-war protesters waved blood-colored hands at U.S. Secretary of State Condoleezza Rice on Wednesday, but police held them back as she left a Capitol Hill hearing room.

Earlier, Republicans had complained about the distraction from the group as they held up signs saying "Condi Kills Kids" during the hearing on the State Department budget.

But the chairman of the House of Representatives committee, a New York Democrat, declined to eject the protesters.

"We're here in the United States of America. And as long as they don't disrupt this proceeding and as long as they're silent, they will be welcome," said Rep. Nita Lowey, who runs the subcommittee overseeing State Department appropriations.

Hey dim-bulb - don't red-painted hands constitute disruption? I guess not in Liberal La-La land. Can you imagine the outrage if someone did this to Barack "Elvis" Obama?
Posted by Robin at 11:06 PM