Dog Faced Soldiers Deserve Our Thanks 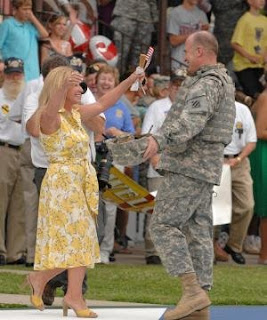 A hearty welcome home to the members of the 3rd ID from Ft. Stewart GA. This group of soldiers were part of the Surge and have completed their 15-month tour of duty in Iraq. And boy did they make a difference! Here's some of Maj Gen Rick Lynch's comments during the Welcome Home Ceremony on Monday...

"In the course of life, you get a choice between reading history and making history, and by God, we made history over the past 15 months," he said to hundreds of family members and soldiers at Fort Stewart Monday."

You can't go from tyranny to democracy overnight, you don't build up an economy overnight, so it was a struggle. We started at the bottom and worked our way up, 75 percent of my soldiers lived with the population," said Lynch. "Then the turning point started, when the people of Iraq saw that the enemy had been vanquished in that area and the coalition was there to stay, they said, 'how can we help?'

"We had 36,000 concerned citizens. We called them the Sons of Iraq and they secured their area and that happened in September and October and I saw a drastic drop in attacks and casualties. By the time we left, there was a 90 percent reduction in civilian casualties," he continued. "That's because the local people said, 'I'm tired of violence, I'm tired of attacks.'"

Too bad SanFran Nan neglected to mention the accomplishments of the dog-faced soldiers when she was praising Iran for its role in Iraq. I won't be holding my breath waiting for a statement of thanks from any of the Leftoids.

152 heroes gave the ultimate sacrifice during the deployment...

Lynch paused to remember 152 soldiers killed during the deployment and honored the heroes who continued the cause.

"I've changed my definition of what a hero is," said Lynch. "We held memorial services for each soldier killed and I attended 152 services. Someone who knew them would eulogize the soldier and everyone would be crying including the division commander. After the memorial services, we all donned the battle gear and went back out to fight the insurgents. That's the definition of hero to me."

>Despite the 15 month deployment and loss of 152 brothers & sisters, the 3rd ID MET its 2008 recruitment goal in March. Another myth debunked.

Maj Gen Rick Lynch has been nominated for his 3rd Star and reassignment to become commanding general of III Corps at Fort Hood, TX. His candor and leadership will certainly be missed at Ft. Stewart. The picture posted is Maj Gen Rick Lynch being welcomed home by his wife - That picture just made me smile. Photo credit to Steve Carrington of the Savannah Morning News.

There are some members of the 3rd ID still serving in Iraq. The 2nd Brigade Combat Team is set to return stateside in late June, early July. The 4th Brigade's 15-month deployment ends in early 2009.

Thank You Dog-Faced Soldiers! You are our heroes and we are forever in your debt. And to the families, thank you for your sacrifices while your soldier served in Iraq. You have my utmost respect for holding down the homefront.

And while we're on the subject of Iraq, please read Fouad Ajami's piece in today's WSJ. Here's a snip from the piece...

Fair enough. In the narrow sense of command and power, this war in Iraq is Mr. Bush's war. But it is an evasion of responsibility to leave this war at his doorstep. This was a war fought with congressional authorization, with the warrant of popular acceptance, and the sanction of United Nations resolutions which called for Iraq's disarmament. It is the political good fortune (in the world of Democratic Party activists) that Sen. Barack Obama was spared the burden of a vote in the United States Senate to authorize the war. By his telling, he would have us believe that he would have cast a vote against it. But there is no sure way of knowing whether he would have stood up to the wind.

He makes some great points in the article. Too bad that so many are just obsessed with failure to grasp the concept of Ajami's statements.
Posted by Robin at 9:10 AM