Is It A Smear If It Turns Out to Be True? - UPDATED 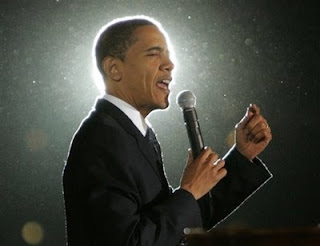 Obama's camp has started a rumor-debunking website to quash all those "fake" stories circulated by the Vast Right-Wing Conspiracy.

And so the Obama campaign has built what might best be described as a Web-based rumor clearinghouse, located at fightthesmears.com, in which it hopes all the shady stories about Obama's faith, his family and his rumored connections with controversial figures can go to die.

You know those "lies" about Obama's connections to 2 radical anti-American preachers, his associations with a known terrorist, his ties to convicted money-men and campaign advisors with ties to organizations that Obama denounced. WAIT... those turned out to be true.

My question about the rumor-debunking - will they debunk the "well that's not the (fill-in-the-blank) that I know" claims that seem to fly from the mouth of the candidate?

And speaking of questionable associations... Jonathan Martin is reporting on the CodePink communist whack-job, Jodie Evans, and her ties to Obama's fundraising. That may be news to some in the mainstream but others have already covered it ... AHEM

Presumptive Democratic Nominee With a Touch of Arrogance

But hold on there a second Mr. Presumptive Nominee... Maybe you should double check your FEC disclosures a little more closely. According to White House for Sale, Obama has 361 bundlers, 14 of whom are Registered Lobbyists. The bundlers have raised $264,492,301 for Obama. (yes I know McCain has more bundlers and lobbyists but he's not the one denouncing lobbyists and PAC contributions)

One name that really popped out while perusing the list of bundlers was Jodie Evans of CodePink fame. Jodie has greased Obama's palms with a total of $50,000 + for his Presidential run. Doesn't CodePink qualify as a "special interest group"? And why hasn't Obama gotten the pink rose treatment like the Pinkos did for Jack Murtha? And for those tinfoil hatters - two of Obama's bundlers work for the CARLYSLE Group.... Daddy grab the smelling salts....

Not to mention Sweetness & Light and many other blogs. Check out White House for Sale for more details about Obama's bundlers.

One little statement in Martin's column sticks in my craw though...

According to research being circulated by GOP sources, Evans has a record of inflammatory statements such as saying that women were better off in Iraq under Saddam Hussein, "Men are dying in their Hummers in Iraq so you can drive around in yours" and, my favorite, that the invasion of Iraq amounted to "global testosterone poisoning."

Research circulated by GOP sources? How about just Googling her name? There's a plethora of documentation about Jodie Evans and her background on the 'Net - most of it in her own words. You don't need GOP sources for that.

Paging Jodie Evans - your reservation for the seat under the Obama bus has been confirmed...

Those rumor debunkers are gonna be quite busy but hey that's great job security....

UPDATE:
Michelle Malkin has a great post up about the latest Obama minion to get a seat under the bus.

Dick Durbin has joined the crew at Fight the Smears and says that anyone that criticizes Obama or his wife is going to Hell. I nominate Dick Durbin as the Leon Fortunato of the Obama Campaign.

Jonn over at This Ain't Hell highlights some of the articles discussing Obama's lack of judgment when it comes to character.
Posted by Robin at 9:36 AM