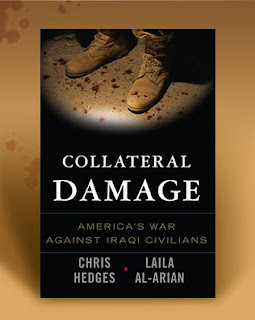 I think I'm gonna start a blog devoted to nothing but reviews of books written by stark raving mad lunatics. At least it would prevent more than 1 sane person from contributing to the bank accounts of the permanently deranged. The only problem is that it would hurt the stockholders for the drug maker of Phenergan because we wouldn't have to take so much to get through the mindless droning of the warped and deluded.

TSO over at The Sniper recently started reading the latest piece of IVAW propaganda to hit Amazon.com - Collateral Damage by Chris Hedges and Laila al-Arian. May God have mercy on him. It was hard enough keeping the BP down while reading some of Hedges venomous spew over at Salon.com.

In this devastating exposé of amilitary occupation gone awry, Pulitzer Prize–winning author Chris Hedges and journalist Laila Al-Arian reveal the terrifying reality of daily civilian life in Iraq at the hands of U.S. troops. Based on hundreds of hours of interviews with combat veterans, Collateral Damage represents the largest number of named eyewitnesses from within the U.S. military to have testified on the record. These veterans, many of whom have come to oppose the war, explain the tactics and operations that have turned many Iraqis against the U.S. military.

Through the voices of the veterans in these pages we learn how the mechanics of war—home raids, convoys, patrols, detentions, military checkpoints—lead to the daily abuse and frequent killing of innocents. They describe convoys of dozens of vehicles roaring down Iraqi roads, jumping medians, smashing into civilian cars, and hitting Iraqi civilians without stopping to survey the damage. They detail raids that leave homes ransacked and families humiliated, shaking with fear, or shot dead in the mayhem. And they describe a battlefield in which troops, untrained to distinguish between combatant and civilian, are authorized to shoot whenever they feel threatened. “Better to be tried by twelve men than carried by six,” many said. Better, in short, to kill than be killed.

Of course the website fails to specify who some of these interviewees are but all you have to do is read any of Hedges' anti-war hit pieces to learn who he likes to use as sources of "knowledge"...
Geoffrey Millard, Camillo Meija and others. Hedges is a little behind the times though because all of this "war crime testimony" came out and was blasted thru the blogosphere during the farce of Winter Soldier II. And it's not like the world hasn't heard Millard's "f-ning hajis can't drive" tale of woe before. Not to mention that these guys haven't been in Iraq in at least 3 years.

While over at the website, you can read a little bio on each of the authors. Hedges can't fart without mentioning his Pulitzer Prize but keep in mind that terrorist enabling photographers are also Pulitzer Prize winners. But Laila al-Arian neglects to mention her ties to terrorist enablers - her father is Sami al-Arian who was initially busted by Bill O'Reilly right after 9/11 and has since been convicted for fundraising for terrorists and ordered to be deported. Yeah - both these authors have a lot of credibility as unbiased reporters... NOT.

I wait with baited breath to read TSO's book review. It should be a doozy if his opening salvo is any indication. BTW if anyone wants to see a human turd in person, Hedges will be in DC at a book-signing party sponsored by IVAW on June 19th. I encourage all Military members - active and retired - to stop by and thank Mr. Hedges and IVAW for their unwavering dedication to the undermining of the United States of America and the Military.