Presumptive Democratic Nominee With a Touch of Arrogance 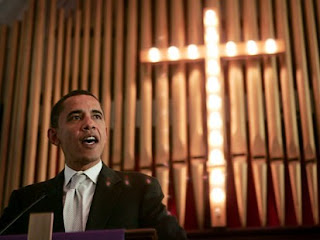 It's been less than 72 hours since Obama became the presumptive Democratic Nominee but you would think he was already sitting in the Oval Office with his attitude. First there was his little "confrontation" with Sen. Joe Lieberman...

Sen. Joe Lieberman, the self-described "Independent Democrat" who caucuses with the Democratic party in the Senate even though he has endorsed Sen. John McCain, R-Ariz, got some tough talk from Sen. Barack Obama, D-Illinois, yesterday about his advocacy for the presumptive Republican presidential candidate and the general tone of the campaign, Democratic sources tell ABC News.

They shook hands. But Obama didn’t let go, leading Lieberman - cordially - by the hand across the room into a corner on the Democratic side, where Democratic sources tell ABC News he delivered some tough words for the junior senator from Connecticut, who had just minutes before hammered Obama's speech before the pro-Israel group AIPAC in a conference call arranged by the McCain campaign

The two spoke intensely for approximately five minutes, with no one able to hear their conversation. Reporters watched as Obama leaned closely in to Lieberman, whose back was literally up against the wall.

Watch out there Mr. Presumptive Democratic Nominee - this is still a free country and the Senator can support and endorse anyone he wants. After all the DNC turned their back on Lieberman in 2006 so why should he toe the party line? (Not to be outdone, Harry Reid gave Joe a stern talking to also)

Then Obama proclaimed that the Democratic Party was HIS party and would follow his rules...

"We will not take a dime from Washington lobbyists or special interest PACS – we're going to change how Washington works. They will not fund my party, they will not run our White House, and they will not drown out the voice of the American people when I am president of the United States of America," Obama said.

But hold on there a second Mr. Presumptive Nominee... Maybe you should double check your FEC disclosures a little more closely. According to White House for Sale, Obama has 361 bundlers, 14 of whom are Registered Lobbyists. The bundlers have raised $264,492,301 for Obama. (yes I know McCain has more bundlers and lobbyists but he's not the one denouncing lobbyists and PAC contributions)

One name that really popped out while perusing the list of bundlers was Jodie Evans of CodePink fame. Jodie has greased Obama's palms with a total of $50,000 + for his Presidential run. Doesn't CodePink qualify as a "special interest group"? And why hasn't Obama gotten the pink rose treatment like the Pinkos did for Jack Murtha? And for those tinfoil hatters - two of Obama's bundlers work for the CARLYSLE Group.... Daddy grab the smelling salts....

Better yet - read the Trailhead blog over at Slate.com for a better rundown of Obama's Lobbying Ties. Quite an interesting read and chock full of info.

Don't get too comfortable with that strut yet, Mr. Presumptive Nominee... You got a lot of miles to go and 57 states to visit.
Posted by Robin at 5:07 PM