THIS is How CodePink Gets Into The Bush Events 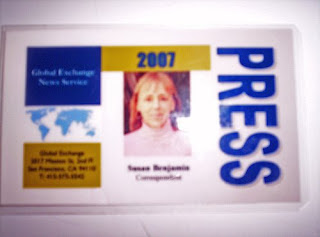 You know these so-called "enlightened" ones sure are stupid. I've always wondered how CodePink could get into so many Washington events to display their epidemic of BDS. Well thanks to a KOS kid who couldn't help but pat himself on the back, we now know...

Early this morning I found an unusual email from Medea Benjamin waiting for me in my inbox. It seems that last week when she was arrested in Florida, they confiscated her Global Exchange press pass, and could I make her another one?

Ever since I figured out how to duplicate Medea's press pass for other members of CodePink, I have been doing so with her blessing. Since Medea is the founding director and CEO of Global Exchange as well as one of the founders of CodePink, how I implemented it may be a bit of a hack; but it is quite legitimate insofar that yes, these are valid press passes for a news organization, created with the full knowledge and permission of the company director.

The pic above is from the KOS diary - yes the nutroot actually posted a pic of the fake ID he made. Not exactly the brightest bulb in the box.

For those not familiar with Global Exchange, they are nothing more than another Medea Benjamin socialist tool. They are not a legitimate news organization. They have no media credentials. I have more media credentials than these morons.

But thanks to Randgrithr the world now knows the truth. Look for copies of this KOS kidz diary to be sent to Capital Police, Secret Service, etc.

Pretty dumb move considering that another KOS kid is connected with the possible fake certificate of live birth for The Obama.
And don't forget that CodePink founder, Jodie Evans, is a bundler for The Obama....

Mega hat tip to Kristinn over at Freeperville.
Posted by Robin at 3:12 PM