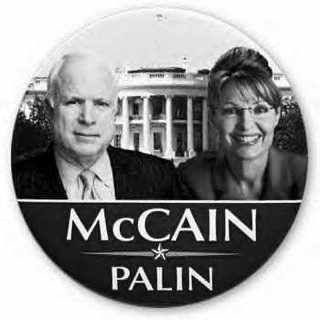 I am shocked, surprised and tickled beyond pink... This is one helluva pick and I have no question about voting for McCain now.

And mega kudos to the McCain campaign... First McCain delivers a very kind and thoughtful congratulations ad to Obama last night while Obama trashed McCain in his speech. Then they completely knock Obama out of the news cycle this AM. The coverage is wall to wall McCain VP speculation. Lastly McCain throws a "hail Mary" and knocks everyone off their feet with the selection of Palin.

OH does this raise the drama factor.... Hillary has just been completely dissed and the fact that Obama picked stuffy Biden over her has just been magnified 100 fold. How will Biden attack this beautiful woman during the VP debate without coming across as the a-hole that he is? Obama's "historical" claim has just been trumped - he may be a part-African American but Palin is a woman. Change? Palin trumps it - you can't get much farther from DC than Alaska.

I'm just beyond thrilled and don't know if I'm going to get any work done today!

McCain you magnificent bastard!
UPDATE: Am watching Gov Palin's speech... what a first impression - coming out with her children and hubby esp the baby. Beautiful lady with great speaking skills. Son deploying to Iraq in Sept. Obama's campaign is already dissing her lack of experience - pure sour grapes. I bet Obama is beating his holy head against the wall especially after that ridiculous show last night. McCain just one-upped The One's campaign in a mega way. Hell now I know how all those swooning women felt during The One's speeches - I'm sitting here crying... with joy and pride. WHAT A DAY!!!
Posted by Robin at 10:41 AM