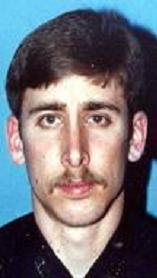 I've marked my calendar for October 27. That is the day that the State of GA will slip a needle into Troy Anthony Davis' arm and send him on his final journey. After 18 years and despite a PR push that rivals Mumia, the SCOTUS said "no" and the execution date is now set. It is the final act in the quest for justice for Officer Mark Allan McPhail and too long in coming...

On Sunday, DA Spencer Lawton finally broke his silence and wrote about the case in the Savannah Morning News. Mr. Lawton gave us a fact-based glimpse into the Davis case and why Davis should be put to death for Murder. Here's a few snips from Lawton's article (You can read the whole thing here)...

And, while it isn't physical evidence, consider the "testimony" of Officer MacPhail himself: When he comes to the rescue of a homeless man being harassed and pistol-whipped, the officer ran past Sylvester Coles on his way to catch Davis. This makes Davis the only one of those two with a motive to shoot Officer MacPhail.

Yet these affidavits were not offered in a motion for new trial until eight days before the first scheduled execution in 2008 seventeen years after Davis' conviction. If this affidavit evidence was so compelling, why didn't they rush to seek a new trial in 2003 when they had most of the affidavits they now rely upon? Or collect those affidavits earlier?

Each of the now-"recanting" witnesses was closely questioned at trial by lawyers representing Davis, specifically on the question whether they were in any way pressured or coerced by police in giving their statements or testimony. All denied it.

The affidavits, in various combinations, had already been reviewed by 29 judges in seven different types of review, over the course of 17 years, before Tuesday's ruling by the U.S. Supreme Court.

Justice was delivered in Chatham County Superior Court 18 years ago by a jury of Troy Anthony Davis' peers. And on October 27th, the final gavel will drop in this case of wanton and deliberate murder of police officer. A man who was attempting to stop a savage beating of a homeless man by a thug who had already shot one person earlier in the evening. Troy Anthony Davis made a conscious decision to stand over Officer McPhail and shoot the mortally wounded officer in the face - while Officer McPhail's service revolver was still snapped into its holster.

Nothing will bring Mark Allan McPhail back to his family and loved ones. But Officer Mark Allan McPhail's life was cut short by Troy Anthony Davis and justice will finally be served.
Posted by Robin at 8:10 PM