Need a Diversion From Politics? Take a Drink of True Blood 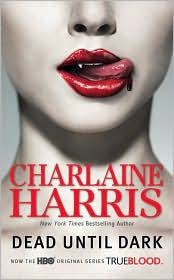 My head has been spinning from the 24-7 political hoopla I have immersed myself in over the past year (actually the past 6 years). Working from home allows me to have FoxNews on during the day and I swear it is like they are turning into another Obama channel. I couldn't take another soundbyte of Obama's "hopey/changey" lies so I flipped the channel over to HBO after I shut down my work computer for the day. The new HBO series "True Blood" was on and craving something "mindless" I started watching... Now I am sorry that I did that because I am truly hooked.

It is quite different from the other series HBO has put together. It involves vampires, shape-changers, telepathics and such but it's nothing like any Dracula I've ever seen. Yes there is "adult content" (AKA nudity, sex) and violence but how can you do a show about vampires without either? There are several running storylines including a series of unsolved murders and of course a love story. Call it a cross between Sex and the City and Interview With the Vampire set in Louisiana. Instead of Carrie Bradshaw, you have Sookie Stackhouse. Instead of Mr. Big, you have Bill Compton (aka Vampire Bill).

The show is based on the "Southern Vampire" series of books written by Charlaine Harris. I had never read her books but I have just finished #2 in the series and have ordered the next. (I think there are 8 total). The books are a great read and a great escape from the craziness in the world. After reading so many political books over the past few years, this series has been delightful so far. I actually like the books more so than the television show but I'm a "reader" anyway.

So if you can't take another minute of listening to The One preaching to the lemmings, check out True Blood on HBO or read the series from Charlaine Harris. A word of caution - you must watch the HBO series from episode 1 to begin to understand what is happening. And remember - it's an Adult Series - certainly not for little eyes or ears.

I have to warn you though - one taste of True Blood and you WILL be hooked. It's not as addictive as V-Juice but pretty darn close. (yes that's an inside reference)

(For added fun go to True Blood on HBO.com and click on the WIKI page link for fan forums and discussions).
Posted by Robin at 10:39 PM