Under the Bus Party on Aisle 5 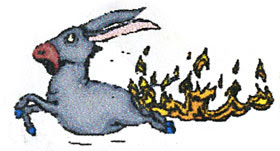 Heh-Heh - this Blago scandal is just what we needed to brighten our holidays and distract us from the screwing we're getting from Congress via the Big 3 Bailout circus. I'm not going to rehash and re-post all the reports on the "Intertubes" because it would take 3 days to gather it all together. But a couple of points from someone "outside the beltway"...

Jesse Jackson Jr - AKA Candidate #5 - fileting himself in front of the cameras and throwing out the race card - "judge me by the content of my character". Coming from the son of the original shakedown artist, that is really a damning indictment. Does anyone really believe JJJ is an innocent pawn in this case? If you do, I have a Senate seat I'd like to sell ya. Especially now that Jesse "nut-cutter" Jackson has lawyered up... hmmmm

The Ballerina Factor - I don't think I've ever heard such deafening silence from Rahm Emmanuel. Where is all the outrage and disgust that was so quick to rear it's head when it was Mark Foley or any other GOP member on the scandal pages? Meanwhile Illinois and DC seafood distributors are reporting quite a run on Cod Sales. Who will be the first one to get "fished" by Rahm in this saga? Or will Rahm get the fish ticket under the bus?

The leftoid syncophants are just outraged that anyone could imply that an acquaintance with a scandalmonger could be significant. How many years did we have to hear about Abramoff's signature in the White House guest book? How many articles were written about a picture of President Bush posing with Abramoff? Damn but that karma hurts.

Nice to see the media has finally gotten a clue and started doing some investigating on its own. Too bad it's post-election investigation. Not too bad that they're bank accounts are suffering for their lemming-ness.

300 hours of wire-tapped telephone conversations.... don't you know that the Illinois and DC convenience stores sold out of Depends and Pepto-Bismol after the Fitzpatrick presser? This little bit of scandal has deep tentacles and is similar to the Titanic iceberg - so much more under the surface to bite ya.

BO is getting an intensive pre-inaugueration schooling on how not to handle a scandal. Man oh man, I would have loved to hear the wire-tapped conversation between BO and Axelrod after the cross-messages from the two of them. Axelrod's eyebrows were working so hard that they knitted him a sweater to wear for his trip under the bus.