Imagine Getting a Personal Dressing Down From the Pope 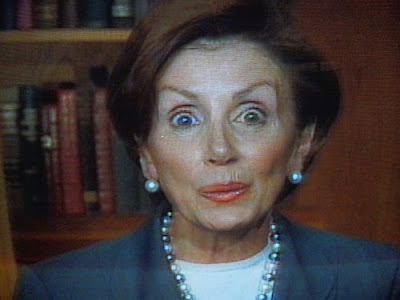 The wicked witch of the left coast, Nancy Pelosi, trotted off to Italy after royally screwing the American public and met with the Pope. Any hope of photo ops with the Pope were smashed by the Pope's obvious disagreement with Pelosi's statements on the Catholic Church and abortion...

The Vatican's attempts to keep the Pelosi visit low-profile displayed its obvious unease with the new U.S. administration. Benedict and Bush had found common ground in opposing abortion, an issue that drew them together despite their differences over the war in Iraq.
Wednesday's meeting, in a small room off a Vatican auditorium after the pope's weekly public audience, was closed to reporters and photographers.
The Vatican also said — contrary to its usual policy when the pope meets world leaders — that it was not issuing either a photo or video of the encounter, claiming the meeting was private.

WOW - after all those pictures of President Bush with the Pope that had to leave a mark. Even worse was the statement released by the Vatican...

"His Holiness took the opportunity to speak of the requirements of the natural moral law and the Church's consistent teaching on the dignity of human life from conception to natural death which enjoins all Catholics, and especially legislators, jurists and those responsible for the common good of society, to work in cooperation with all men and women of good will in creating a just system of laws capable of protecting human life at all stages of its development," the Vatican wrote, having released the statement moments before the two met.

But leave it to clueless Nan to gloss over the whole "sanctity of human life" issue and talk about showing the Pope pictures of her grandchildren... BTW did taxpayers pay for her billionaire husband to tag along on the trip?

"It is with great joy that my husband, Paul, and I met with his Holiness, Pope Benedict XVI today," Pelosi said in a statement released hours after the meeting. "In our conversation, I had the opportunity to praise the Church's leadership in fighting poverty, hunger and global warming, as well as the Holy Father's dedication to religious freedom and his upcoming trip and message to Israel. I was proud to show his Holiness a photograph of my family's papal visit in the 1950s, as well as a recent picture of our children and grandchildren."

Well too bad San Fran Nan - you won't have pictures to hang in your office of THIS visit with the Pope. I'm surprised that lightening didn't strike you down when you set foot on the Vatican property. Not to worry - Nancy will be back on US soil soon and giving Americans the royal flushing they agreed to when they elected The One as President.
Posted by Robin at 7:44 AM