The Teleprompter Is Gonna Be Angry... 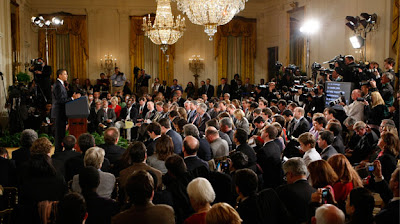 I caught the last half of The One's presser last night. What a crock! I had to sit on my hands to keep from throwing things at the TV - of course that was in between nodding off to his rambling talking point answers.

I loved the fact that Ebony and Politico got to ask questions especially Ebony's question about the "homeless kids". I remarked to my friends, while The One was bloviating about the tragedy of the homeless, that next up was a comment about all the homeless "vets" and once again The One proved me right. Those homeless need to just get in line to get tickets to the next appearance of The One and ask for a new home. That's how Henrietta did it - You know, ask and you shall receive. And about that Porkulus Plan to "save or create 3.5 million jobs" - ask the employees at Catepillar and Gulfstream how that is working out for them?

And let's not forget Ann Compton's token "race" question. Can we have ONE PRESSER without someone throwing out the race card????

I noticed that The One kept looking down at the podium when he started to stumble in his response. Did they get that teleprompter installed in the podium? I also saw the clips of the Presidential "advisors" standing near the walls and aides passing around Blackberries. Was someone "phoning it in" for The One?

But my favorite moment (I had to watch the replay) was The One issuing his opening statement without the teleprompter - opting instead for a large screen TV. Watch out Mr. President - I heard the teleprompter gets quite jealous and may strike back at you like he did during the remarks at the St. Paddy's Day party. Even Ron Fournier at the AP couldn't resist taking a dig at the President...

One of the few times he summoned raw emotion came after a reporter demanded to know why it took him so long to express outrage over the AIG executive bonuses.
"It took a couple of days because I like to know what I'm talking about before I speak."
Even better, he likes to have it up on the teleprompter.

Now you know things are bad when the syncophants at the AP are snarking on The One and his teleprompter addiction. Lordy I need an Advil....
Posted by Robin at 9:11 AM