Remembering The Victims of the OKC Bombing 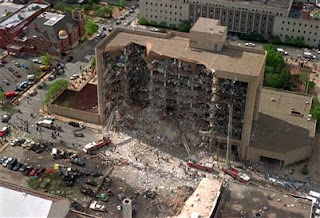 Today is a sad day - not only in US history but in my life. It has been 14 years since Oklahoma City was pulled into the spotlight of domestic terrorism. Hard to believe that it has been 14 years but I still remember every detail of that day.


I lived in OKC in 1995. I was married with 2 kids and worked as a nurse for a home health agency for one of the bigger hospitals. On April 19, 1995 I got the kids off to school and headed to the office to pick up my patient assignment. The message system was down and I could not retrieve my schedule the night before. Since I worked "prn" (as needed) I took a shot that I would have patients to see. When I arrived at the office I discovered that I had no visits for that day. I was dressed and out the house so I debated going to the library downtown since it was one place I had yet to venture. Deciding that laundry and housework were more important, I headed back to the house.

I was stopped at the stoplight right before our neighborhood when I heard this loud boom and my mini-van lurched forward. Thinking someone had hit me, I looked in the rear view mirror but there was no one behind me. I scanned the sky to see if it might have been one of the numerous thunderstorms we were famous for having but the sky was clear blue. Dismissing it as a gas well explosion, I made the left hand turn onto our street. As I was pulling in the garage, the DJ on the radio made a comment about the loud noise and said they would have more info shortly.

I went on into the house and started doing laundry. I didn't turn on the TV or the radio for some strange reason. It was several minutes later that my phone rang. It was my brother in GA calling to check to see if we were alright. I laughed and said "yes" and asked what brought on this sudden concern. He said there had been an explosion in downtown OKC and it was really bad. I turned on the TV and almost fell to the floor. While trying to catch snatches of the news, I called the rest of our families to tell them we were all fine. I was mentally checking off where everyone was - my husband was at work and the kids were at school.

Suddenly I realized that my daughter's class was scheduled for a field trip to a symphony concert in downtown OKC. This was an annual thing for the 4th graders of our school district. In horror I remembered that the Civic Center was downtown. I finally got through to the school and they assured me that the buses had not arrived downtown when the explosion occurred and the kids were all headed back to school and were safe. A few days later there was a piece in the Daily Oklahoman that said if the bomb had gone off 15 minutes later the entire block around the Murrah Building would have been jam packed with school buses full of 4th graders.

I checked in with work since we were part of the hospital system and they said to stay near the phones. All the nurses were on standby. I plopped down in front of the TV and the images damned near broke my heart. Since the local channels were feeding straight to the newsrooms, the images were graphic and horrible. I will never forget the pictures of bleeding children being hustled to waiting ambulances and frantic parents trying to find their little ones.

My son's baseball team was scheduled to play that evening. None of the games were cancelled as they wanted the kids to have some sense of normalcy in an otherwise insane frightening day. When we arrived at the ballpark, we were given the sad news that one of the coaches of the baseball team worked in the Murrah building and was missing. We were all devastated and the boys were told after the game. No one really watched the kids play that night - everyone had little minature tv's with them watching the reports from downtown. I stayed up all night watching the local channels reporting live from the scene praying that someone would be found in the carnage.

It was a day or 2 before we were notified that they had found Lanny Scroggins body. My son was devastated since he really liked Mr. Lanny. Plus Lanny's son played on the same ballteam. I still have the video from the NBC news show with an interview with Lanny's wife prior to the authorities finding his body.

As the days passed the enormity of the tragedy began to sink in. The entire city moved in a daze. We all drove with out headlights on and wore yellow and purple ribbons. Volunteers were plentiful at the Red Cross locations as they were at the designated collection sites for food and items for the rescuers. It was amazing - a call would go out on the TV or radio for something that was needed at the site and within minutes they would be back on the air asking people to stop bringing the specified item as they had much more than they needed.

The images from the TV and the newspaper were heartbreaking. Who could ever forget the famous picture of the fireman carrying the body of little Bailey Almond? The stories from family members were devastating. The one that struck me the most was the husband of a missing victim crying that he couldn't remember what his wife had on that morning when she left for work.

The day of Lanny's funeral was surreal and we were only friends, not family. I can't imagine what it must have been like for the family. The entire ballteam wore their uniforms and were honorary pallbearers. It was heartbreaking watching 7th and 8th grade boys sobbing their eyes out. After the burial, we went downtown to the site. I will always remember the feeling when we first saw the building - it was like the breath was knocked out of me. We stood there on the corner where the makeshift memorial had been set up for a long time. A week or so later, I took the kids back downtown and we made a video of all the destruction and the rescue workers. The devastation from blocks away was unbelievable.

It was during our walk downtown that I saw the library - the very one that I had decided against going to that fateful morning. The windows were blown out - it was close enough to the building to have received some of the force of the blast. I almost hit my knees - but for laundry I would have been sitting in that library at the very moment of the explosion. I thanked God the entire way home.

The last time I went to the site of the Murrah Building was New Year's Eve. The kids and I went downtown for the family "Opening Night" celebration that OKC had each year. After we ate dinner we walked down to the site and prayed silently. Less than a year later, the kids and I moved back to GA. I have never been back.

So on this day full of beautiful sunshine, I can't help but think about 14 years ago. So many innocents were killed. So many promising lives snuffed out in the blink of an eye. Our innocence vanished that day along with the feeling of being secure in the heartland. My prayers to all the families, the survivors and the victims touched by this act of terrorism. It may have been 14 years ago, but you will never be forgotten.
Posted by Robin at 2:40 PM