I have been doing some investigative work and have found a picture of President Obama's Super-Secret Propaganda Tool. This device has been replicated and deployed with all Democratic Congressional Members to use at their meetings with constituents. Several devices have been forwarded to members of the lamestream media including select bloggers. It is a powerful device and can be most effective against those who have an addiction to koolaid... 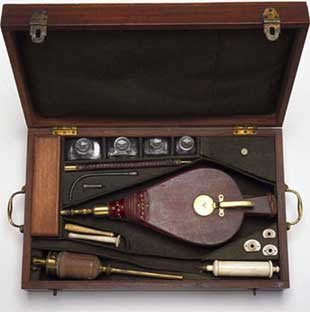 Tobacco Smoke Enema (1750s-1810s)
The tobacco enema was used to infuse tobacco smoke into a patient’s rectum for various medical purposes, primarily the resuscitation of drowning victims. A rectal tube inserted into the anus was connected to a fumigator and bellows that forced the smoke towards the rectum. The warmth of the smoke was thought to promote respiration, but doubts about the credibility of tobacco enemas led to the popular phrase “blow smoke up one’s ass.”

Thanks to the crack investigative team here at Chickenhawk Express for uncovering this super-duper secret. Remember - you saw it here first!