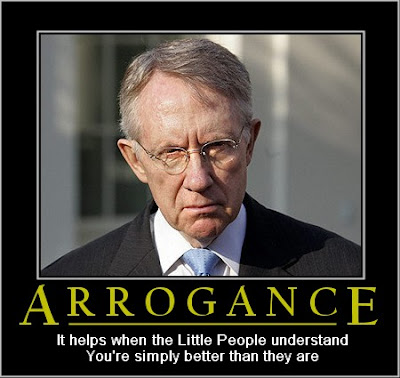 I love it when I see people stand up to the inept, corrupt and self-centered members of Congress - whether it be Democrat or Republican. Many Congressional Members walk around with a chip on their shoulders and demand subservience from their bully pulpit. They forget the whole reason that the are in this cushy job with magnificent perks. They were elected to SERVE THE PEOPLE OF THEIR DISTRICTS - not to act as if they are a regional potentate.

The Las Vegas Review Journal got a taste of the absolute arrogance and moral corruption of Dem leader Harry Reid this week...

On Wednesday, before he addressed a Las Vegas Chamber of Commerce luncheon, Reid joined the chamber's board members for a meet-'n'-greet and a photo. One of the last in line was the Review-Journal's director of advertising, Bob Brown, a hard-working Nevadan who toils every day on behalf of advertisers. He has nothing to do with news coverage or the opinion pages of the Review-Journal.

Yet, as Bob shook hands with our senior U.S. senator in what should have been nothing but a gracious business setting, Reid said: "I hope you go out of business."

So today the Review Journal fired back at this snake in the grass...

We're still here doing what we do for the people of Las Vegas and Nevada. So, let me assure you, if we weathered all of that, we can damn sure outlast the bully threats of Sen. Harry Reid.

They lit into Reid for his bullying tactics...

But to fully capture the magnitude of Reid's remark (and to stop him from doing the same thing to others) it must be called what it was -- a full-on threat perpetrated by a bully who has forgotten that he was elected to office to protect Nevadans, not sound like he's shaking them down

And then they issued a threat of their own to the Majority Leader...

We won't allow you to bully us. And if you try it with anyone else, count on going through us first. That's a promise, not a threat.
And it's a promise to our readers, not to you, Sen. Reid.

Reid is already treading water in early polling for his re-election bid. Let's hope the citizens of Nevada give this POS the Tom Daschle treatment come election day. It couldn't happen to anyone more deserving than Harry Reid

“We have a message for Harry Reid: your arrogance, your condescension and your failures as a Senator are emblematic of the reasons we launched the “Tea Party Express” and if politicians like Reid don’t change their ways, then they shouldn’t be surprised when they receive a ‘pink slip’ from the voters come November 2010."
Posted by Robin at 4:54 PM