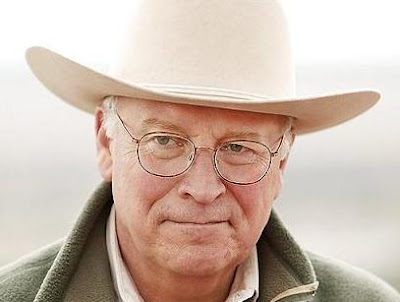 I love Dick Cheney. He pulls no punches and lets everyone know what he's thinking and believes. Cheney has now exposed the lies from the Obama Administration regarding the Afghanistan mess...

Cheney disputed remarks by White House chief of staff Rahm Emanuel that the Bush administration had been adrift concerning the war in Afghanistan and that the Obama administration had to start from the beginning to develop a strategy for the 8-year-old war.

To the contrary, Cheney said, the Bush administration undertook its own review of the war before leaving office and presented its findings to Obama's transition team.

"They asked us not to announce our findings publicly, and we agreed, giving them the benefit of our work and the benefit of the doubt," Cheney said. The strategy Obama announced in March bore a "striking resemblance" to what the Bush administration review had found, the vice president said.

Emanuel told CNN on Sunday that the decision regarding what to do in Afghanistan is more complex than whether to send more troops. The U.S. commander there, Gen. Stanley McChrystal, has reportedly asked for as many as 40,000 additional troops to combat the Taliban insurgency and al-Qaida fighters.

"When you go through all the analysis, it's clear that basically we had a war for eight years that was going on, that's adrift, that we're beginning at scratch, and just from the starting point, after eight years," Emanuel said.

Cheney said the Obama administration seems to be pulling back and blaming others for its own failure to implement the strategy it had embraced earlier in the year.

"The White House must stop dithering while America's armed forces are in danger," the former vice president said. "It's time for President Obama to do what it takes to win a war he has repeatedly and rightly called a war of necessity."


Of course the media will downplay this (if they even report this at all) because it might make Dear Leader angry.

All because Obama's favorite for President of Afghanistan didn't win the election, despite Carville's expert assistance. The blood of every military hero that has died since McChrystal's report was issued is on Obama's hands. Let's see if CodePink and their ilk protest this...
Posted by Robin at 9:14 AM