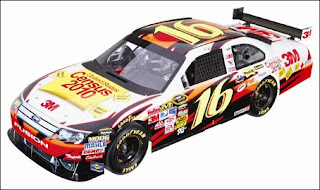 I LOVE Nascar. On any given Sunday afternoon from Feb to November you can find me parked in front of the tv watching the race (well at least for part of the day). I have been to several races and even the Daytona 500. Yes - I am a member of JR Nation.

So imagine my surprise to see a "Census 2010" car zipping around Atlanta Motor Speedway this past weekend. WTF? Turns out the Census Bureau spent $1.2 mil to sponsor Greg Biffle's #16 car for 3 races starting in Atlanta.

Now I appreciate the need to get the word out about the Census but this has truly gotten out of hand. First we had the $25mil Super Bowl ad that was beyond stupid. We've got Ed "Greenie" Begley doing some lame ads about a "picture of America" with some truly bad acting. Next we have the commercials where a man in his bathrobe compares mailing his census form in to saving his city - who knows how much that cost? Now this.

According to press releases, the Census will be doing some heavy advertising during March Madness and during the Dora the Explorer broadcasts also. Census officials claim that if people mail in their forms, it will save money and manpower by avoiding follow-up interviews. But wait - that means LESS JOBS for people that are in need of work (albeit temporary jobs).

The government is just throwing money down the crapper like there is no tomorrow. Billions of dollars thrown at pork-barrel projects and earmarks. Lord knows how much money we've spent keeping the Obama's in prime beef and pastries for their friends. And don't even get me started on the costs of healthcare reform... Now this massive ad campaign for the Census.

I know from experience that Nascar folks are some of the most patriotic, country loving people around. I doubt that many Nascar fans will be inspired to mail back their forms because Greg Biffle drove a Census Car in 3 races. I personally don't appreciate the government intruding in one of my favorite sports. What's next - campaign ads on the hoods?
Posted by Robin at 8:06 AM